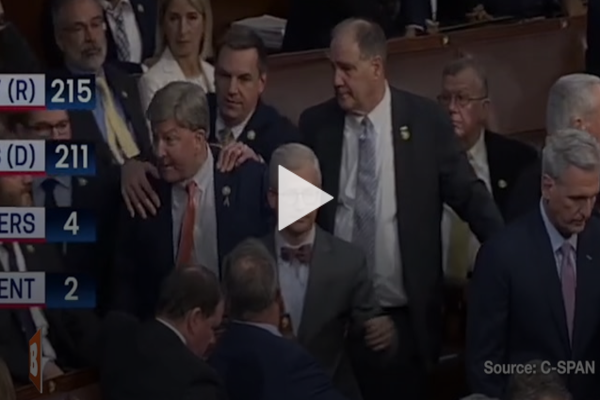 (breitbart) – Tensions were high on the House floor on Friday night as members had to physically restrain Rep. Mike Rogers (R-AL) from going at Rep. Matt Gaetz (R-FL) after the 14th failed attempt to elect Rep. Kevin McCarthy (R-CA) as speaker of the House.

McCarthy came within half a vote of securing the speakership after the 14th vote. Although McCarthy received 216 votes, this was not enough to secure the speakership at the time. Gaetz and Rep. Lauren Boebert (R-CO) voted “present” and four other House Republicans voted for other members.

Shortly after the 14th failed vote, McCarthy approached Gaetz at his seat towards the back of the chamber to have a discussion. It is unclear what Gaetz and McCarthy discussed. As Gaetz pointed his finger at McCarthy, another member stepped in front of McCarthy and tried to defuse the situation.

After McCarthy turned back to his seat, Rogers approached Gaetz’s seat and leaned over the three members seated between him and Gaetz to say something to the anti-McCarthy holdout.

However, as Rogers leaned over to get in Gaetz’s face, another member, reportedly Rep. Richard Hudson (R-NC), came behind Rogers, put his hand over Rogers’s mouth, and pulled Rogers away from the confrontation.

In addition, several photographers caught the altercation from different angles:

Members of the House erupted in shock as the altercation occurred, prompting McCarthy to turn around and walk back towards the two members.

“Rogers immediately left for the cloak room to cool off,” according to NBC News.

After the altercation, a motion to adjourn failed, leading to a 15th vote in which McCarthy finally secured the speakership.