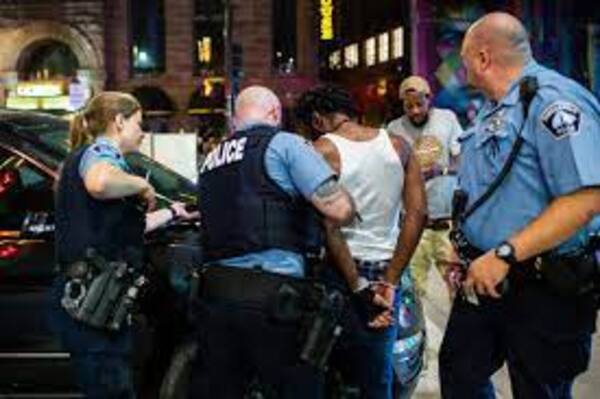 The troubling events occurred outside a gay bar — called the Gay 90s — on Saturday night and were recorded and shared on social media by independent photojournalist Rebecca Brannon. She noted that the content in her video was just a “fraction” of what she saw “and was able to capture in passing” that night.

The footage begins with a man being assaulted by a group of individuals outside the bar, where he is seen being kicked and punched multiple times. As he attempts to get up, two assaulters kick him in the head again before the next cut shows an individual being carried away on a stretcher.

The following clip shows a group of different people scuffling outside the same area.

In another clip, mounted police officers are seen attempting to break up a fight before they are approached by a group, mostly women, who try and pet the horse. The officer yells at the group, “Don’t touch my horse!” But one woman is heard screaming back, “Fuck your horse, bitch!”

The video then cuts to a group of vehicles blocking traffic outside Gay 90s while a woman stands on top of a sedan and twerks. Vehicles are also seen street racing through downtown Minneapolis while running through red lights.

Brannon recalled that it was “completely chaotic” outside the bar and noted there have been “multiple shootings” in the area within the past few months.

“It’s been some time since I went downtown at night given the crime and shootings. Saw a lot more chaos than I expected especially given how cold it was,” said Brannon via Twitter. “Police were scarce. Situations felt volatile in which I tried to keep my distance especially at [a] fight break up in a bar parking lot.”

Brannon’s observation of a lack of police officers downtown is reflective of the hundreds of cops who have left the Minneapolis Police Department after the city became ground zero for the nationwide Black Lives Matter riots following the death of George Floyd in 2020.

After the city council voted to defund the police department, approximately 25 percent of the police force either retired or quit within the year after the riots, Breitbart News reported.

While the city council has since backtracked on cutting the police budget by allocating funds to hire more cops, crime is still rising in the Democrat-controlled city.

In 2021, there were 93 homicides recorded in Minneapolis, which is “just a few shy of the total killings in 1995, when the city earned the nickname ‘Murderapolis,’” CNN reported.

The crime wave had become so dire that residents in the Lowry Hill neighborhood raised $210,00 to pay the city to have more patrols within the area, Breitbart News reported.