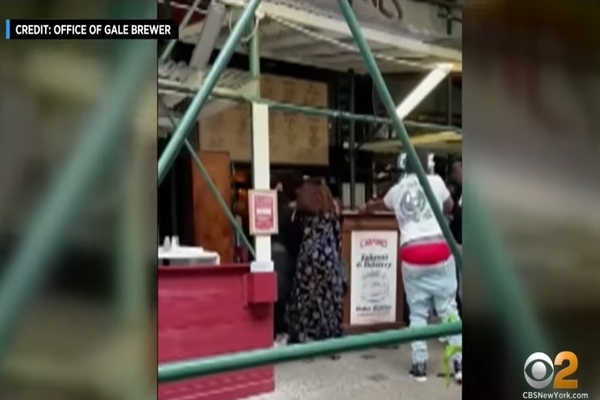 (breitbart) – Three Houston women were charged after authorities said the group assaulted a New York City hostess when they were asked to provide proof of vaccination to dine inside a restaurant.

Video footage showed the incident involving the tourists at Carmine’s Restaurant in Manhattan that occurred at approximately 5:00 p.m. on Thursday, ABC 13 reported.

“It also happened to be the third day since enforcement of New York City’s vaccine mandates began,” the outlet continued:

City inspectors had just commended Carmine’s for their enforcement of the policy, but hours later, the hostess was attacked by the three women from Houston who didn’t want to eat outside. The women have been identified as 49-year-old Sally Lewis, 44-year-old Kaeita Rankin, and her 21-year-old daughter Tyonnie Rankin.

In video of the scuffle, the group nearly knocked over a podium as one of them appeared to grab the shirt collar of a woman standing behind it.

“Oh my God,” the woman shouted as bystanders intervened.

At one point, a man in a white T-shirt was seen carrying a woman away from the scene while another man wearing a white apron helped him.

“This turned into a mess, and from there its inexcusable, ridiculous,” Carmine’s owner, Jeff Banks, told reporters.

The victim, who had been working for just three weeks, reportedly asked the women for proof of vaccination and identification cards to match them.

“When she questioned the legitimacy of their vaccination cards, the out-of-town visitors got upset and lunged at her, punching her repeatedly and also injuring two other staff members. The women reportedly didn’t want to show ID, which police say contributed to the belief they were not valid,” the ABC article read.

The three women were subsequently arrested and charged with assault and criminal mischief.

The owner has joined other restaurants in the area to raise concerns regarding the enforcement of the vaccine mandate, and hired private security to stand beside the hostess booth over the weekend.