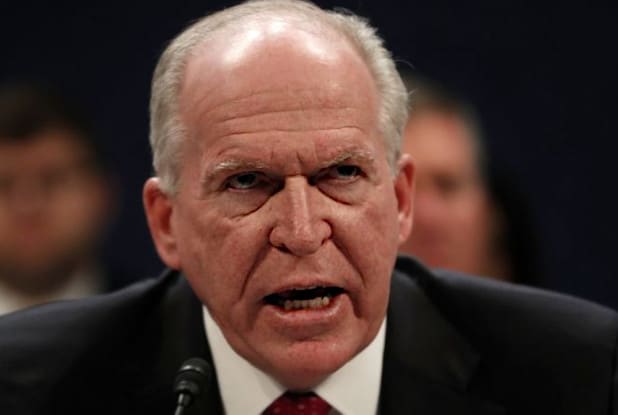 (Gateway Pundit) – I was chatting last night with a retired CIA colleague, a person well connected to many folks still working at our former employer, and he dropped a bombshell–he had learned that John Brennan set up a Trump Task Force at CIA in early 2016.

This is definitely something Prosecutor John Durham should explore. A “Task Force” normally is a short term creation comprised of operations officers (i.e., guys and gals who carry out espionage activities overseas) and intelligence analysts. The purpose of such a group is to ensure all relevant intelligence capabilities are brought to bear on the problem at hand.

While a “Task Force” can be a useful tool for tackling issues of terrorism or drug trafficking, it is not appropriate or lawful for collecting on a U.S. candidate for the Presidency.

But Brennan did it, so I’m told, and it had the blessing of the Director of National Intelligence Jim Clapper.

The Task Force members were handpicked. The job was not posted. Instead, people were specifically invited to join up. Not everyone accepted the invitation, and that is now a problem for John Brennan. If those folks are talking to Durham’s folks then Brennan’s days are numbered.

Brennan reportedly took it upon himself to recruit foreign intelligence organizations, such as MI-6, the Aussies, the Italians and the Israelis, to help in spying on Trump and his campaign. He sold it as a “counter-intelligence” mission citing his fear that Trump was a Russian puppet. And these foreign services agreed to help. But they did more than passive collection. They helped create and implement covert actions, such as entrapping Michael Flynn as a foreign agent and cultivating and ensnaring George Papadopoulos.

The case officers on the task force managed the tasking and monitoring of actions with the foreign services. This included travel overseas. The Task Force also apparently was involved in working with Ukraine to help manufacture intel that could be used against Paul Manafort. The point is, this Task Force was working furiously on a broad front to go after Donald Trump and his campaign team. Most importantly, there is documentary evidence on specific task officers were directed to carry out. And there are also financial records–e.g., money was spent to fund travel overseas and to pay cooperating assets.

I think Durham’s investigators will discover that Azra Turk, the honey pot sent to a meeting with George Papadopoulos, was a member of the Brennan Task Force. It also is highly likely that elements of this task force played a key role in the drafting of the January 2017 Intelligence Community Assessment on Russian Interference in the US Presidential Election.

I am also hearing that CIA Director Gina Haspel is cooperating. She was the CIA Chief of Station in London when this Task Force was up a running but my friend says she was kept out of the loop. She and Brennan have a history and it is not friendly. Brennan blocked her from getting a top assignment in what used to be known as the “Directorate of Operations.” So no love lost between the two.

The gamechanger is that the elevation of this matter as a criminal investigation, along with Attorney General Bill Barr’s full authority to access and review all classified information, means that any attempt to cover this up will lead to obstruction of justice charges.

This is one of the main reasons CIA personnel are lawyering up.

Johnson even suggests that former CIA Chief John Brennan is behind it.

Johnson added, “This is the last big gasp so they’re pulling out all the stops. You can see who the desperate people are… We just saw former CIA Director John Brennan out on national news saying, “Please anybody else out there who can be a whistleblower please step forward. Now’s the time.”

Peter described the current accusations of the left as a “three way pitch-and-toss” between the Democrat Party, the liberal media and these deep state whistleblowers.