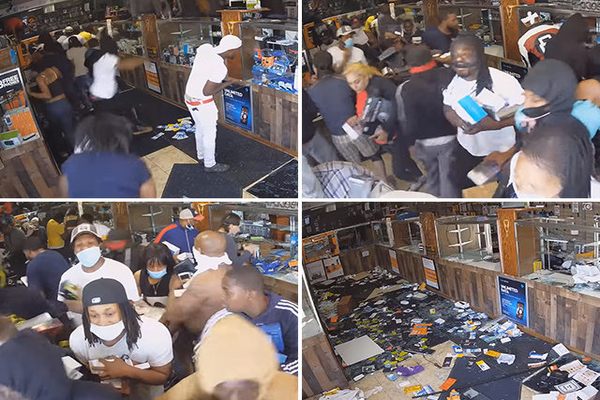 (breitbart) – The Chicago Police Department released surveillance footage showing dozens of suspects looting a store in the Windy City’s West Side neighborhood during protests over the police-involved death of George Floyd.

Video showed dozens of people swarming the West Chicago Avenue business, which sold electronics among other items, around 1:45 p.m. on May 31.

Many were captured taking whatever merchandise they could find over a roughly 25-minute period. At least one person violently kicked and shattered a protective covering under a counter that housed additional items.

Police said they’re seeking the public’s help in identifying those involved. They released still photos of 23 people suspected of committing a burglary during the incident.

The looting incident took place on a day when Chicago police arrested 699 individuals and saw 132 officers injured, according to WBBM-TV.

“When you look at everything that’s happening right now in this city, the city is in total unrest. In my opinion, I think the mayor has lost the confidence and the control of this city,” Chicago Alderman Anthony Beale (D) told the Fox News Channel in early August. “She’s listening to the wrong people, and the wrong people are the ones that [are] really leading this unrest in the city of Chicago. You know, the aldermen are the ones that are elected by their constituency, and there’s a total disregard of listening to the aldermen, who know the pulse of this city, know the pulse of their ward.”