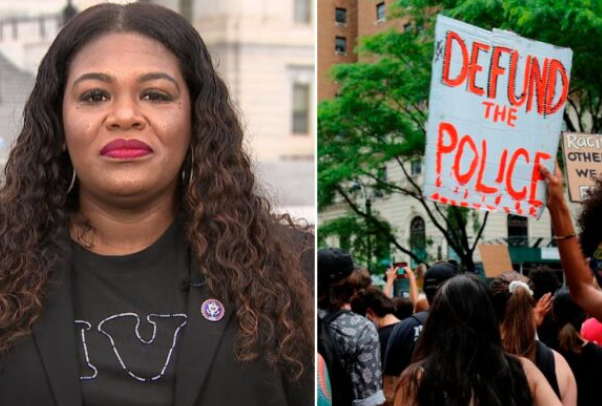 (bigleaguepolitics) – Rep. Cori Bush (D-MO) has made abundantly clear her position that she should have private security even as she works to defund the police for the lowly commoners.

The Congressional Black Caucus stalwart made the comments on CBS News that are quickly going viral due to her incredible lack of intelligence and overwhelming hypocrisy.

“I won’t let them get that off! You can’t get that off! I’m going to make sure I have security because I know I have had attempts on my life. And I have too much work to do. There are too many people that need help right now for me to allow that,” Bush said.

Because she believes she is so important in her work to achieve race-based communism, Bush will spare no expense to secure herself while pushing to defund police for ordinary Americans.

The clip can be seen here:

Big League Politics has reported on Bush’s massive private security budget as she goes around rallying the country to turn on the police:

“As the US descends into chaos, the ruling class is having all of their bases covered by turning to private security for basic security functions.

And yes, the primary proponents of the Defund the Police movement are relying on private security to stay safe.

Exhibit A is Congresswoman Cori Bush. The freshman member of The Squad has apparently spent approximately $70,000 on private security per records from the Federal Election Commission (FEC)

The money was sent to a security group named RS&T Security Consulting, per the FEC records released on July 15. In addition, the Democrat’s campaign paid $15,000 to Nathaniel Davis for “security services.” This brought the total amount of money spent on private security to $69,120, according to a Fox News report.

Low IQ lawmakers like Bush would literally turn the entire country into the United States of Somalia. We are seeing the end game of diversity and multiculturalism in South Africa right now. Bush would happily bring such a scenario to America under the guise of equity and social justice.