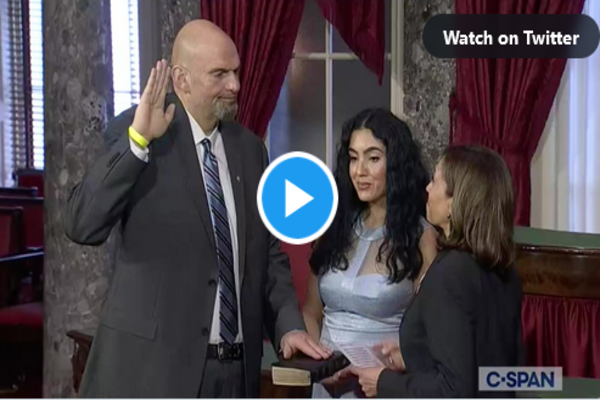 (breitbart) – Pennsylvania Democrat John Fetterman appeared “completely lost” as he officially entered Congress, posing awkwardly and with his eyes repeatedly wandering off while he took the oath as Pennsylvania’s 54th senator.

In a viral clip that has reached nearly six million views as of Friday morning, former lieutenant governor, now freshman senator from Pennsylvania John Fetterman appears “completely lost during his first moments as a US Senator.”

The clip depicts Fetterman during his swearing-in by Vice President Kamala Harris on Tuesday, having defeated Trump-backed Republican Dr. Mehmet Oz in November.

The 6-foot-8 Democrat senator appears unmoved and unresponsive, even moments later as his family surrounds him for a photo.

He made no formal public comments and avoided meeting with reporters, despite his high public profile.

Fetterman, 53, suffered a serious stroke days before the Democratic primary, and struggled throughout subsequent appearances during the race, raising public questions about both his health and his mental faculties.

In response to the clip of his swearing-in, many took to Twitter to describe the “painful” scene.

“Beyond painful,” wrote Monica Crowley, who was assistant secretary for Public Affairs at the U.S. Treasury under former President Donald Trump.

Last month, the New York Times “Styles” ranked Fetterman one of 2022’s “most stylish” people in a piece that prompted a wave of ridicule given that the tattooed “media darling” is known for his irreverent dressing habits and signature hoodie.