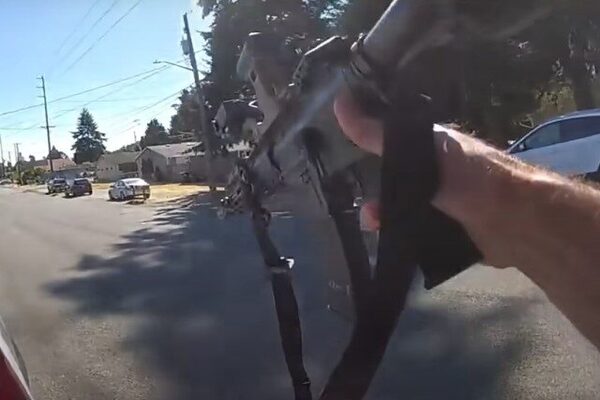 (breitbart) – Bodycam video released this week by Pierce County, Washington, investigators shows an officer pull his service rifle out of a bag over 180 yards from a suspect and take the suspect out with one shot.

The man, 40-year-old Peter T. Collins, was allegedly shooting at officers, which is what prompted the call on the individual.

The Star Tribune reports that Collins allegedly fired 15 rounds at officers as they responded to an assault call on August 28. Collins’s nephew is the one who called 911, warning that Collins had “two to three guns” and might try to shoot officers.

Three officers responded to the call. Collins exchanged gunfire with the first around 2:56 p.m., after which the first officer warned that Collins was shooting with a rifle.

Collins exchanged gunfire with another officer about three minutes later. At 3:01 p.m. officer Christopher Munn pulled up and parked his police vehicle just over 180 yards away.

Collins allegedly shot at Munn, who then exited his vehicle, retrieved a rifle, and took one shot, striking Collins in the chest.

Pierce County investigators indicate that Collins also shot himself, but they did not detail where he did so.

The investigators ruled that the cause of death was “homicide from a rifle wound to the chest.”

In all, Collins was armed with two rifles and two handguns.