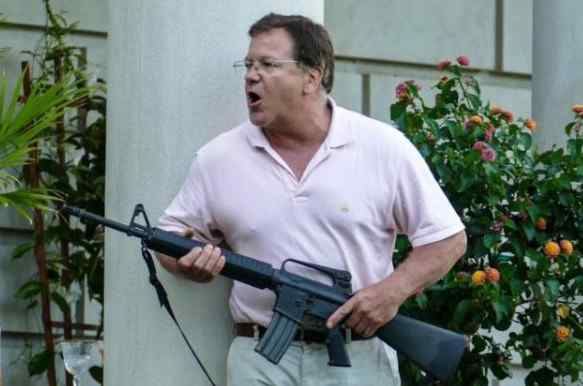 He’s not a Democrat. And he definitely doesn’t support Black Lives Matter.

(Big League Politics) – The Saint Louis man who confronted trespassing rioters agitating outside of his house spoke with Daily Wire host Michael Knowles on Wednesday, setting the record straight on two reports about himself that have recently circulated. Mark McCloskey and his wife confronted a mob of Black Lives Matter rioters who had broken through the gate of the private community in which he lives while armed, becoming the target of ire from left-wing activists and the city’s Soros-funded Democratic prosecutor.

McCloskey wanted to set the record straight on two important issues, rebuking reports that had surfaced in mainstream media claiming both that he was a Democrat, and that he actually supported the Black Lives Matter movement.

“I want to set the record straight on one thing. I’ve been reading a lot of reports about me from the media… Some of whom have accused me of being a Democrat, and I have donated money to various candidates, particularly ones who were personal friends of mine over the years, but I’ve been a lifelong Republican.”

McCloskey spoke of the Black Lives Matter in no uncertain terms, describing the group as a Marxist organization and a terrorist group that he in no way supports.

A press release originating from the McCloskey’s lawyers had made it seem as if the couple were actually Democrats who supported the movement. It appears likely that the couple’s lawyers took considerable liberties in painting the couple as such, considering McCloskey most definitely doesn’t appear to be a fan of the street riot movement.

McCloskey also recounted his experiences preparing for a second round of mob protests outside of his house, for which he hired a team of private security for after progressive activists organized a harassment campaign targeting him and his wife.