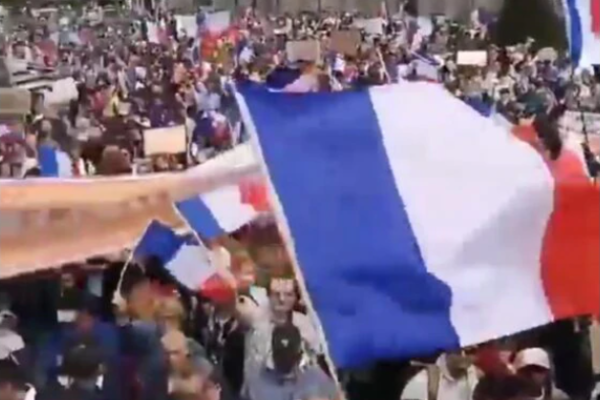 (bigleaguepolitics) – The French are inspiring freedom lovers everywhere with their anti-vaccine passport protests, which have now stretched into a fourth week. On Saturday, many thousands and potentially even millions of people in multiple French cities including Paris rallied against the implementation of a “vaccine passport” that grants only vaccinated people access to many societal functions. Frenchmen of all colors and creeds railed against the regime of French president Emmanuel Macron, who rose to prominence as an employee of the Rothschild investment bank, named for the infamous globalist banking dynasty.

The protester then gave advice to Americans as we deal with Coronavirus dystopia ourselves. The protester stated, “Don’t wait for your conservative leaders. They are a joke. They lecture the world on freedom & democracy though your election was stolen, your freedoms are crushed, & your country is sinking. No mainstream politicians in our protests. Do like us: throw them in the garbage, & act.”

Many well-respected members of French society are participating in the protests, including firefighters who galvanized the Freedom protesters in Marseille.

Police seemed militarized and hostile to the protesters, characteristic of French police conduct throughout the Yellow Vest and freedom-oriented protests of recent years.