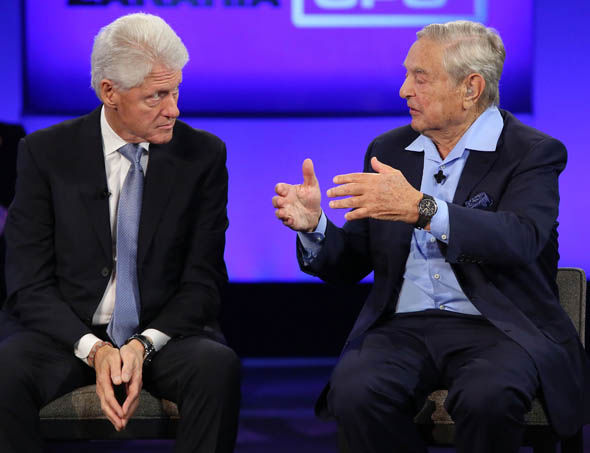 (Gateway Pundit) – An investigative report revealed that $90 Billion in US Taxpayer money has been funneled to overseas organizations in the name of helping those with HIV AIDS. In reality the funds are distributed to organizations including the Clinton Health Access Initiative and George Soros’s Open Health Institute.

Corey Diggs put together a report that shows that efforts to combat HIV AIDS may just be fronts for money laundering schemes ran by the Clintons and George Soros. The story begins in August 2000, a few months before Bill Clinton’s second term ends. On August 19, 2000:

Bill Clinton signed a bill establishing the Global Fund to Fight AIDS, intending to locate it inside the World Bank in Switzerland. The Washington Post reported “Clinton, who will travel to Nigeria and Tanzania, is directing Treasury Secretary Lawrence H. Summers to begin negotiations with the World Bank to set up the trust fund.”

In her efforts to unfold the truth, Diggs uncovered that money sent from the US to help fight AIDS actually ends up in the hands of the likes of George Soros:

In 2003, The Global Fund issued [with funds from the US and others] its first grant to the Open Health Institute (OHI), an Open Society Foundation affiliate (George Soros) operating in the Russian Federation, to the tune of $88 million. Yes, Russia. Grants continued through 2018. But this wasn’t the only involvement George Soros had with the Global Fund. More on this in subsequent chapters.

In 2002 the Clintons inserted themselves into the global initiatives with AIDS:

Enter Bill and Hillary Clinton, who had nicely set this into motion back in 2000 just before Bill’s exit from the White House, and with the Clinton Foundation already established, why not create an illegal offshoot called Clinton Health Access Initiative (CHAI) and say it’s part of the foundation? Despite the fact it’s totally illegal to claim another non-profit within a non-profit without filing separate tax returns or registering it as a separate entity, but hey, this is par for the course for the Clintons. In fact, they went on with this charade for 7 whole years from 2002-2009 when they finally decided to separate it out as its own entity and begin listing their donors. This donor list is quite an eye opener and very extensive to say the least, including such donors as UNITAID, the Clinton Foundation, the CDC and CDC Foundation, WHO, The Global Fund, the World Bank, governments, universities, and hundreds more. Surely there is no pay-to-play action taking place in this upstanding organization.

Background: I spoke with Ellen DeGeneres’ manager, David McGuire, today about Ellen serving as a Special Envoy for Global HIV/AID Awareness. OGAC is developing a concept paper for consideration, but David agreed that there will be some sort of arrangement for Ellen to promote both your speech and World AIDS Day through social media or perhaps you phoning into her show at some point.

In conclusion, Diggs reports the following:

In short, U.S. taxpayers are forced to give their hard-earned money to the government, who has funneled $90 billion dollars of it to NGOs with a substantial amount to the Global Fund. Meanwhile, big pharma is lining the pockets of politicians. The Global Fund is in charge of distributing the funds to numerous organizations and NGOS, many of which are located in the US, as well as health ministries throughout developing countries. And yes, Clinton Health Access Initiative is one of the recipients, in addition to George Soros’ Open Health Institute, among many other familiar faces. Yet, the drugs repeatedly have issues with making it to the alleged victims of HIV, some have been watered down, millions in funds have mysteriously vanished, and the founding board member and chairman of the Global Fund did a 2-year stint in prison for securities fraud. Simultaneously, U.S. patients who are suffering from HIV cannot afford the $39,000/year treatment that is only costing $75/year for nearly the same treatment in developing countries. This is how your hard earned money is being spent – all $90 billion dollars worth.

How many billions left the US and landed in the pockets of individuals like the Clintons, Soros and others?