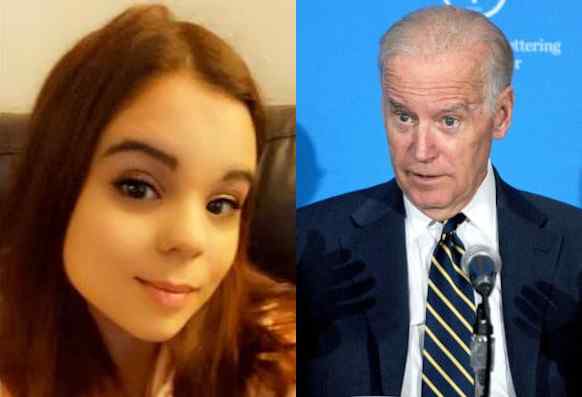 (Gateway Pundit) – Another woman has come forward with allegations about Joe Biden’s inappropriate behavior — claiming that he commented on her age and her breasts when she was only 14-years-old.

Speaking to Law & Crime, Eva Murry, 26, claims that she was sexually harassed by Biden at First State Gridiron Dinner & Show in 2008, a swanky political roast for Delaware press and politicians similar to the White House Correspondents Dinner.

Murry is the niece of former Republican Senate candidate Christine O’Donnell, who was running for senate against Biden at the time and had occasionally went to political events for school credit. She was in Middle School at the time.

At the dinner, Murray says that when she met Biden he asked her age and then, surprised by her youth, commented about how she was “very well endowed for fourteen!”

“I remember walking into the lobby and being in awe of all the people in such fancy clothes,” Murry told Law & Crime. “Our two parties of people gravitated towards each other and everyone started saying their hellos. When it was Biden and my aunt’s turn to say hello he quickly turned to me and asked how old I was. I replied with my age and he replied with the comment ‘Fourteen? You’re very well endowed for 14!’ I was confused but it was definitely weird, he looked me up and down and hovered his eyes on my chest so I had some clue [about] the notion of his comment but didn’t fully understand at the time. We quickly separated from his area after the encounter.”

Murry has six people to corroborate her claims, as well.

“One friend and her sister said that Murry told her details of the alleged incident more or less immediately after it happened. Four other friends of Murry’s said they were told about the incident, with the same details, between two and three years after it originally occurred,” Law & Crime reports.

Multiple friends who Murry told about the event spoke to the outlet on the record.

“She was telling me about the event and explained what happened,” Victoria Anstey, a friend of Murry, said. “I remember being so shocked. I didn’t know who Biden was or anything. Just [that] she said he was an ‘older man’ was enough for me to not like the situation.”

“Eva is telling the truth,” she added. “She told me he looked at her chest and she was well endowed. She looked very uncomfortable. I asked how old he was. She said like an older man. I said like old like a teacher or elderly and she said old like a teacher. I remember myself getting mad.”

Anstey said that she is a Democrat and she “can’t stand Trump” and that it isn’t about politics, it’s about men in power abusing their positions.

Another friend, Katielynn Weaver, said that Murry told her about the incident over ten years ago.

Aileen Callaghan, another friend, said Murry told her when they were teenagers. “It was probably 2010 when she told me,” she told Law&Crime. “She mentioned that he was at an event she was with with her aunt and that he was a creep and was looking at her chest the whole time.”

Eva Murry’s older sister, Jenna Murry, said she was told about the alleged incident “within a week or so of the dinner.”

Following the incident, Murry says that she would some times have to see him at campaign events and would feel sick to her stomach knowing he would be there. She said that she encountered him “about three times after that” at similar events and that “his eyes never were on my face.”

“I feel his comments were verbal sexual harassment,” Murry said. “I think I was too naive to realize exactly what it meant at the time but I vividly remember the uncomfortable feeling I had in the pit of my stomach during the whole encounter. It wasn’t Biden’s words alone that made me so uncomfortable, it was the look, the tone, the whole general vibe was off.”

Murry’s reason for going public isn’t political, according to the young woman. She explained that she was becoming upset with seeing him all over her Facebook feed when he became the presumptive nominee. She began telling the story on her friend’s Facebook posts when they would share something about him and wanted them to know what kind of person he was.

“It got overwhelming repeating myself on everyone’s post,” she said. “So I made a master thread with the intentions of informing my friends and family who I care very much about, just what kind of man Biden is.”

Murry has two children and is currently engaged.

“No man or woman should get away with acting that way and that is what this boils down to,” she said.