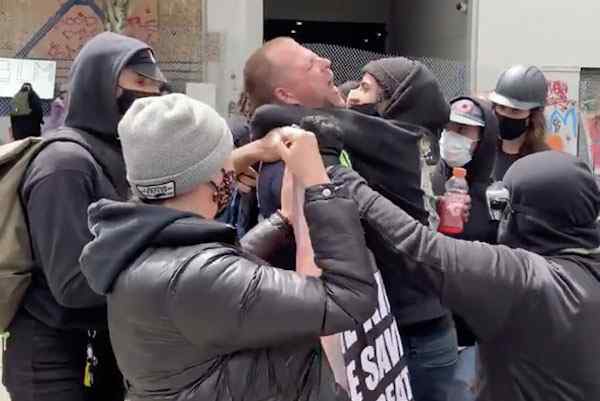 (Infowars) – Video out of the so-called Chapel Hill Autonomous Zone (CHAZ) in Seattle shows a group of Antifa terrorists choking, tackling, and eventually evicting a Christian street preacher from their utopian society.

The incident apparently started when Antifa began harassing and threatening the preacher within the zone.

Separate video then shows Antifa surrounding the preacher, with several thugs “bear-hugging” and sexually assaulting him.

“What does it feel like to be hugged by a homosexual?” one of the Antifa asks before forcing kisses upon him.

“Glory to the king!” the man cries as he resists.

Soon after he breaks free, another video captures Antifa tackling the preacher and putting him in a headlock as he screams, “You’re choking me!”

Another video ironically shows Antifa explaining to the preacher that they have the right to deport him from their new nation.

The video of the preacher getting choked out had gotten over 150,000 views by the time President Trump retweeted it on Saturday.

Notably, the media and Democrats like Seattle Mayor Jenny Durkan are gaslighting the American people over Antifa’s armed occupation of downtown Seattle, characterizing CHAZ as a “peaceful protest” and a “summer of love” type festival with a “block party atmosphere” now that it’s police-free.