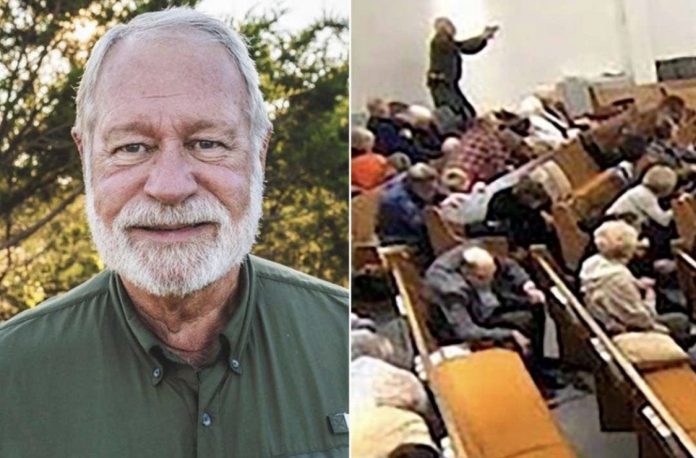 (Gateway Pundit) – As reported earlier by Cassandra Fairbanks two people were killed and one person is in critical condition after a shooting at the West Freeway Church of Christ in northwest Texas.

The shooter was prevented from creating more carnage by armed members of the church, several of whom drew their own weapons in response to his attack, as well as a security guard. It has now been confirmed that the gunman was shot and is one of the two people killed.

No less than four church members, including one guard, pulled guns on the shooter before he caused more carnage!!

The shooter was dressed in black with a hood over his head before he started shooting.

The gunman was wearing a fake beard(?)

The church took the video down but it is still posted online here.

The head of church security Jack Wilson gunned down the terrorist with one shot to the head.

Jack Wilson posted a thank you on Facebook on Sunday afternoon after he gunned down the Freeway Church of Christ gunman with one shot to the head.

Jack Wilson is a church security member at the Freeway Church of Christ.

He thanked everyone for their prayers and thanked God for his role in church security where he was able so save numerous lives at the church.

I just want to thank all who have sent their prayers and comments on the events of today. The events at West Freeway Church of Christ put me in a position that I would hope no one would have to be in, but evil exist and I had to take out an active shooter in church. I’m thankful to GOD that I have been blessed with the ability and desire to serve him in the role of head of security at the church. I am very sad in the loss of two dear friends and brothers in CHRIST, but evil does exist in this world and I and other members are not going to allow evil to succeed. Please pray for all the members and their families in this time. Thank you for your prayers and understanding.