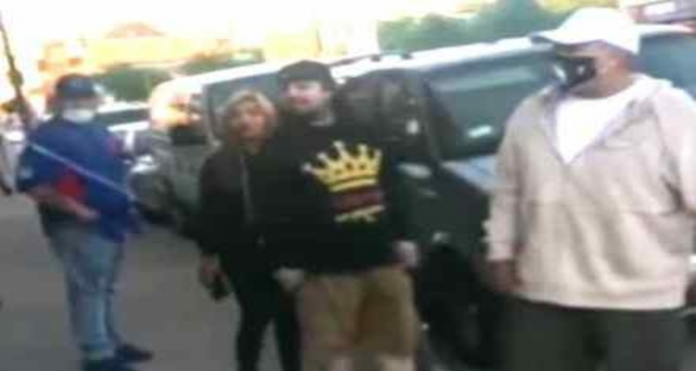 (Gateway Pundit) – As more and more people take matters into their own hands to deal with the looters and rioters, even the Latin gangs in Chicago are coming off looking like the good guys, as they are fighting off the looters. It appears as though several shootings took place, as you can hear shots ringing out as people start scattering.

It appears as though this took place in Cicero, just west of Chicago.

Four people shot, two fatally, in Cicero Monday as unrest and protests over the killing of George Floyd continued for another day. Town spokesman Ray Hanania confirmed the deaths to WGN News. Hanania said at least 60 people were arrested Monday. Hanania said there have been “outside agitators” that have entered Cicero “after being rebuffed by the closure of downtown Chicago. The only shots fired have been by these outside agitators and looters who are not Cicero residents.” The identities of the people who were killed have not yet been released. No further information was provided.

During a night of unrest in Cicero that left two people dead, some residents say police officers allowed Latino gangs to patrol the community with bats and crowbars to fend off looters. Cicero’s police superintendent called those allegations “ludicrous.” There also were reports on TV and social media of business owners on rooftops with assault rifles and other guns ready to prevent destruction of their businesses. And some residents accuse Latino gang members of targeting African Americans driving on Cermak Road. Shapearl Wells, an African American resident of Cicero, said she and her family were targeted Monday afternoon on Cermak. It happened first to her cousin, who was driving out from Chicago to visit her. She was at a red light on Cermak Road and Central Avenue when a group of men approached the cousin’s car. “They told her, ‘You not from around here you n – – – – – bitch,’” Wells said. She told Wells what happened when she arrived. Wells, who’s lived in Cicero since 2003, was stunned. She went out for a drive to see for herself. At some point, “about 20 to 25 Latin Kings” approached Wells’ car. “I rolled down my window and they told me I would only be OK if I go in the house and stayed inside.” She said she called the police to tell them what happened, but nothing was done.

In another video, we see a few more shootouts, as well as the gangs ramming their big trucks into the looters’ cars. One guy hollers out “F** the looters, n, we protect this hood. .. . I had A whole group fo mfs out here trying to loot, they were just parked right here, we f* said no, get the f* out of our f* neighborhood. We will not let our f* neighborhoods f**** burn!”

Of course this being Chicago, this must all be fake news, because they have some of the strictest gun control laws in the country. Welcome to the liberal utopia!