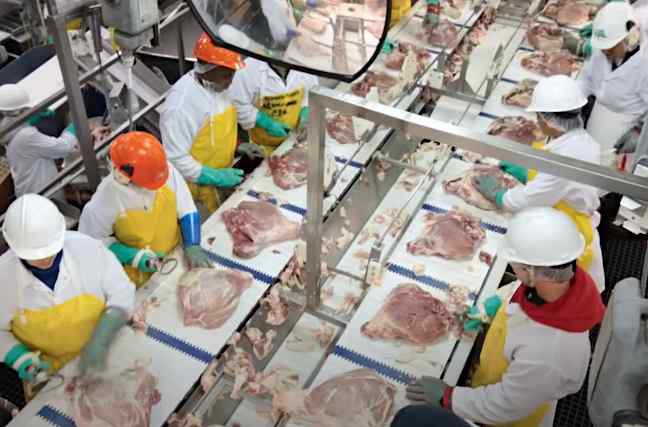 (Gateway Pundit) – China owned US pork producer, Smithfield Foods, shut down its operations in South Dakota recently due to the coronavirus.

Actions like this lead to many wondering if China is attempting to undermine the US food supply.

As we previously reported the pork producer warned of meat shortages in the US following their plant shutdowns.

It is interesting that the beef packing plants are not facing a similar crisis.

NBC News reported a couple of days ago that Smithfield Foods, was shutting down two more pork producing plants in the US due to the coronavirus:

What MSNBC doesn’t report is that Smithfield Foods is a Chinese owned company.

Smithfield Foods, the world’s largest pork processor and hog producer, has been making headlines for shutting down plants in three states after a rash of coronavirus cases hit its Sioux Falls, South Dakota operation. Less well known: its Chinese billionaire owner Wan Long, who took a small state-owned meat processing plant and expanded it into a multinational company with more than $24 billion in annual sales. Now, the owner of Nathan’s Famous hot dogs and Cook’s ham is scrambling to contain one of the largest coronavirus hot spots in the U.S.

Wan Long, who at age 80 is chairman and CEO of WH Group, is the firm’s largest individual shareholder with a roughly 16% stake; Forbes estimates his net worth at $1.9 billion. Wan joined Henan Luohe Meat Products Processing United Factory — then a state-owned entity — in 1968, and eventually grew the business into WH Group. His son, Wan Hongjian, is now the deputy chairman and vice president of the group.

Money.com reported that CEO Wan Long was one of the highest paid CEO’s in the world in 2017:

One of the highest-earning CEOs around the world beat out tech honchos like Tim Cook, Elon Musk, and Mark Zuckerberg in 2017. Instead, he makes pork. Wan Long, the billionaire head of WH Group Ltd., earned an astounding $291 million in salary and stock payments last year. The figure comes from the company’s annual report, and makes him the the highest-paid executive of a Hong Kong-listed company, Bloomberg reports.

Based on Wan Long’s ties to Communist-run China, it’s understandable that Americans would wonder if his efforts to shut down American pork producers are more to hurt the American public through food shortages than to be health conscious in an industry not known for concerns about workers’ health; the company is owned by a citizen from a country not known for the rights of its citizens.