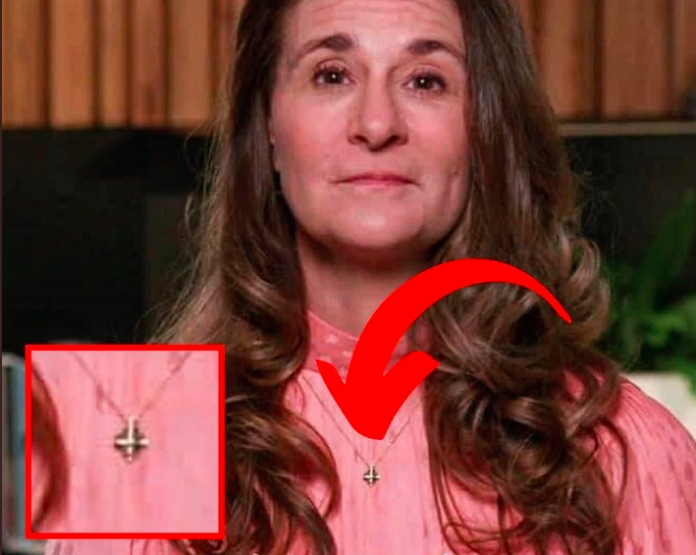 (Big League Politics) – The fake news is covering for Melinda Gates after she performed a media appearance wearing jewelry that contained an image of a satanic inverted cross.

This enraged people on social media who called out the wife of technocratic overlord Bill Gates for her vile display.

Far-left propaganda outlet Snopes fact checked the claim with their usual lack of credibility and ethics. Despite the fact that she can clearly be seen wearing the inverted cross, they rated the claim “mostly false” based on a grainy photo of Gates they used.

“Based on our examination of the videos in question, Melinda Gates did wear a necklace with a pendant in the shape of a cross in interviews,” they wrote.

Big League Politics has reported on how Melinda’s husband is floating the notion of injecting people with ink for the purposes of vaccine compliance, which comes dangerously close to mark-of-the-beast microchips:

Globalist oligarch Bill Gates gave a chilling reply to a question during a recent “Ask Me Anything” question-and-answer session on the social media provider Reddit. “What changes are we going to have to make to how businesses operate to maintain our economy while providing social distancing?” a user asked Gates during the AMA session. “The question of which businesses should keep going is tricky. Certainly food supply and the health system. We still need water, electricity and the internet. Supply chains for critical things need to be maintained. Countries are still figuring out what to keep running,” Gates responded. It was the next part of his answer that alarmed individuals concerned with protecting medical freedom and privacy rights. “Eventually we will have some digital certificates to show who has recovered or been tested recently or when we have a vaccine who has received it,” Gates said. Reddit users were immediately thunderstruck with Gates’ ominous response and were scrambling for a clarification from the former Microsoft CEO that never came. “Digital certificates? Are you saying each person individually will receive a document that says we were tested? Can that be used against us?” a Reddit user posted. “No, he’s saying Microsoft and MIT developed “tatoo (sic) markers” that show whether you have recieved (sic) a vaccine or not. This will be coupled with Gate’s (sic) new invention, ID2020, which is a digital ID microchip implanted under the skin,” another Reddit user said to explain Gates’ motives.

The Gates clan is exhibiting power on a global scale using the coronavirus pandemic as an excuse to make their most wicked dreams come true. Perhaps that is why Melinda was paying tribute to her dark lord on national television.