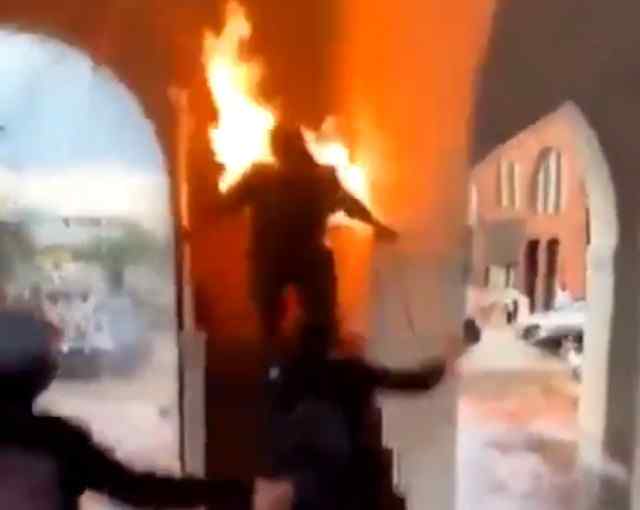 (Breitbart) – A Black Lives Matter rioter appears to have accidentally lit himself on fire while trying to set ablaze the Market House in Fayetteville, North Carolina, on Saturday, according to video shared to social media.

The video, which appears to have been live streamed, shows a rioter lighting a fire inside the Market House — but catching fire in the process. Protesters can be heard audibly gasping as the rioter catches fire, prompting the man to flee from the building. “Get him out, get him out!” one man can be heard yelling.

Protests in Fayetteville started at 3:00 p.m. and demonstrators made their way to the city’s downtown area, where things remained non-violent until around 7:00, reports CBS 17.

At 7:15 p.m., the Market House was set on fire as well as an American flag in front of the building. The fire was extinguished within 45 minutes.

Police sent a civil emergency response unit to the area at around 9:00 p.m. “to protect people, property and businesses.”

“Around 10:15 p.m. protesters went to Cross Creek Mall and gathered in the parking lot. Some items were looted from the JCPenney before police showed up and stopped the looting,” notes CBS 17.

Tense protests over Floyd’s death and other police killings of black people grew Saturday from New York to Tulsa to Los Angeles, with police cars set ablaze and reports of injuries mounting on all sides as the country convulsed through another night of unrest after months of coronavirus lockdowns.

The protests, which began in Minneapolis following Floyd’s death Monday after a police officer pressed a knee on his neck long after he passed out, have left parts of the city a grid of broken windows, burned-out buildings, and ransacked stores. The unrest has since become a national phenomenon as protesters decry years of deaths at police hands.

Tens of thousands of people were in the streets across the country, many of them not wearing masks or observing social distancing, raising concerns among health experts about the potential for spreading the coronavirus pandemic at a time when much of the country is in the process of reopening society and the economy.

After a tumultuous Friday night, racially diverse crowds took to the streets again for mostly peaceful demonstrations in dozens of cities from coast to coast. The previous day’s protests also started calmly, but many descended into violence later in the day.