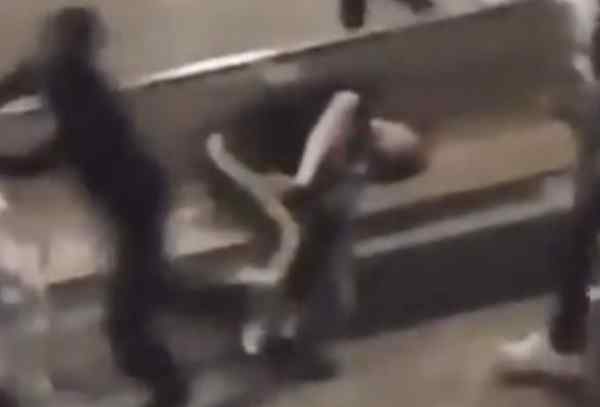 This is what the Left wants to replace the police with.

(Big League Politics) – A vicious black mob targeted white kids on the boardwalk in Ocean City, Md. on Tuesday night in a gruesome scene that was caught on video by a couple in a motel room. White kids were beaten senseless and presumably robbed by a large group of blacks who cackled and cheered on the thuggery as it took place.

“We are equally horrified by the actions displayed on social media video depicting violence and unruly crowds. This behavior has no place in Ocean City, and violence like this will not be tolerated. The town and OCPD are working immediately on addressing this disturbing behavior,” Ocean City Mayor Rick Meehan said.

City officials are worried about how a recent wave of violence will affect tourism in the town that is known for its beaches. More businesses could shutter because of this savagery that is being unleashed:

Recent violence in Ocean City, Maryland, is raising concerns from local officials as the tourism season in the beach community begins. Cellphone video taken Tuesday night captured a fight on the boardwalk. The video appears to show a large group of people on the boardwalk when a brawl breaks out. One person appears to get hit and falls motionless to the ground. The crowd moves around before what appears to be another fight. This comes just days after police put out two pictures of suspects following a stabbing Sunday night on the boardwalk between 6th and 7th streets.

As the Black Lives Matter terror movement gains traction throughout the country, criminal elements are feeling emboldened to rape and pillage with the police being too skittish to do much of anything to stop them.

Black Lives Matter is now publicly calling for police forces to be disbanded so the rule of the jungle can replace the rule of law nationwide.

“We call for a national defunding of police. We demand investment in our communities and the resources to ensure Black people not only survive but thrive,” Black Lives Matter said in a statement. “George Floyd’s violent death was a breaking point — an all too familiar reminder that, for Black people, law enforcement doesn’t protect or save our lives. They often threaten and take them.”