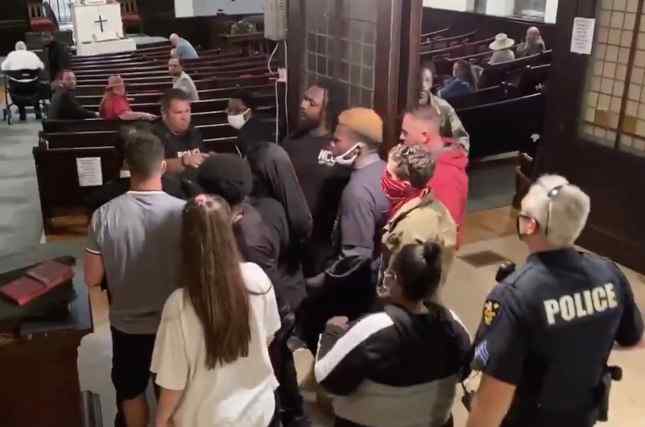 (Gateway Pundit) – We’re now witnessing the next wave of the destruction and breakdown of US society. Christian churches are the latest target by the godless left.

This is very disturbing.

The mob targeted a Catholic prayer rally and beat several Catholics in St. Louis a week ago.

This past weekend the mob targeted a Troy, New York Church.

The BLM mob attacked Christians on the steps of the church and interrupted the sermon screaming profanities.

The BLM mob was screaming “We’re not here for violence!” as they dragged parishioners from the church steps!

The violent mob then went inside and screamed “Black Lives Matter!” during the sermon.

The BLM mob screamed at a young mother carrying a baby and walking with two young children into the church.

It appears the BLM mob has been targeting the church for several weeks now after they raffled a rifle.