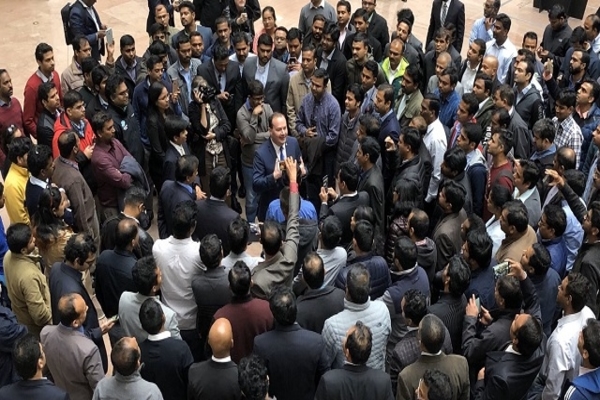 (informationliberation) – The GOP-controlled Senate stabbed their voters in the back on Wednesday by passing Utah Senator Mike Lee’s green card giveaway to reward Big Tech by allowing them to import hundreds of thousands of Indian workers to take jobs from struggling American tech workers.

The bill failed earlier this year but Lee brought it back and the GOP-controlled Senate just passed it with unanimous consent — right before the election in Georgia which will determine whether the GOP holds on to the Senate.

America First patriots were urging folks to call their senators on Wednesday and demand they object to the bill.

It would only have taken one senator to force a debate or force a vote on the bill.

Not one senator objected.

Republican Senator Mike Braun of North Dakota could be seen smirking after the bill was passed:

As Ryan Girdusky noted, not even Republican Senator Josh Hawley of Missouri — who has made a name for himself by bashing Big Tech — bothered to muster up an objection.

The same goes for Kelly Loeffler and David Perdue, both of whom are up for reelection in Georgia.

The GOP are also currently teaming up with Democrats to shove through a $740 billion defense authorization bill that will erase our history by renaming military bases named after Confederate generals. President Trump demanded the bill include a measure to change Section 230 but his objections were ignored.

The contempt these GOP traitors have for their own voters is almost beyond belief.

It appears that now that they think they’ve got Trump out of the way they’re just going to return to business as usual — i.e. screwing us relentlessly on behalf of their globalist donors.

This is naked tyranny.