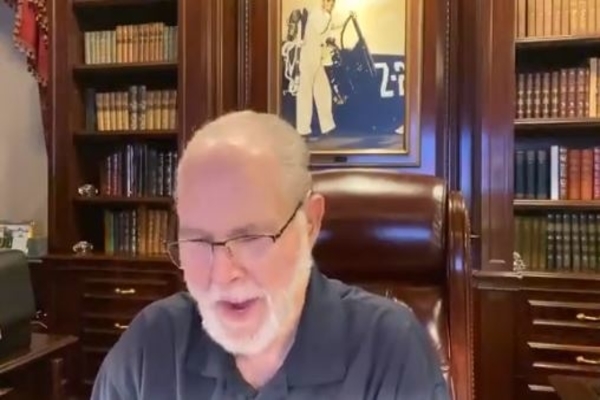 (breitbart) – Talk radio legend Rush Limbaugh delivered a brief address from his home library prior to watching the Senate vote to confirm Amy Coney Barrett to the Supreme Court, telling viewers that “we don’t have a choice” in this election, because Democrats fundamentally aim to “erase” the Constitution.

“And it just reminds me. Folks — we don’t have a choice in this election,” Limbaugh said ahead of the vote. “It’s got to be [President] Donald Trump. We’re not going to have the kind of country everybody thinks we’re going to have.”

Limbaugh echoed the remarks made by former Democrats who now support Trump, explaining that the Democrat Party is no longer what it used to be.

“This is not the old Republicans versus the Democrats where we all have the same objectives just different philosophies on how to get there. They do not have those objectives anymore,” he explained.

“Their purpose is to erase the Constitution, start over, rewriting it, eliminating the concept of the citizen has rights which prevail over government,” he continued, calling it “serious” and “scary.”

“We don’t have a choice. You have to get out there and vote Trump,” he concluded:

Barrett delivered a brief address after the swearing-in ceremony at the White House on Monday evening and used the opportunity to highlight the differences between a legislator and a judge.

“It is the job of a senator to pursue her policy preferences. In fact, it would be a dereliction of duty for her to put policy goals aside,” Barrett said.

“By contrast, it is the job of a judge to resist her policy preferences. It would be a dereliction of duty for her to give in to them. Federal judges don’t stand for election,” she continued. “Thus they have no basis for claiming that their preferences reflect those of the people”:

A judge declares independence not only from Congress and the president but also from the private beliefs that might otherwise move her. The judicial oath captures the essence of the judicial duty. The rule of law must always control. My fellow Americans, even though we judges don’t face elections, we still work for you. It is your Constitution that establishes the rule of law and the judicial independence that is so central to it.

The oath, Barrett said, means that she will execute her duties “without any fear or favor” and that she will do so “independently of both the political branches and of my own preferences.”