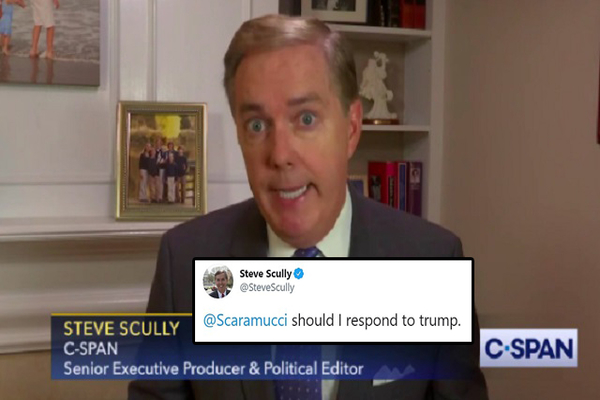 (informationliberation) – C-SPAN’s Steve Scully has admitted he lied when he claimed last week that his Twitter account was “hacked” after getting caught messaging Trump-hater Anthony Scaramucci to coordinate whether he should “respond” to Trump.

From the AP:
C-SPAN suspended its political editor Steve Scully indefinitely Thursday after he admitted to lying about his Twitter feed being hacked when he was confronted about a questionable exchange with former Trump aide Anthony Scaramucci.

He had been frustrated by Trump’s comments and several weeks of criticism on social media and conservative news outlets about his role as moderator, including attacks directed at his family, he said.

“These were both errors in judgement for which I am totally responsible for,” Scully said. “I apologize.”

[…] C-SPAN said Scully confessed to lying about the hack on Wednesday.

“He understands that he made a serious mistake,” the network said. “We were very saddened by this news and do not condone his actions.”

“I was right again!” Trump said on Twitter after hearing the news. “Steve Scully just admitted he was lying about his Twitter being hacked. The Debate was Rigged! He was suspended from @cspan indefinitely. The Trump Campaign was not treated fairly by the ‘Commission’. Did I show good instincts in being the first to know?”

Sculley’s lie triggered an investigation from the FBI.

“Steve Scully notified us that his Twitter account was hacked,” the Commission on Presidential Debates (CPD) said in a statement last week. “CPD reported the apparent hack to the FBI and Twitter, and we understand that the federal authorities and Twitter are looking into the issue.”

One can imagine a conservative pulling a similar stunt would be criminally charged for wasting the authorities’ time but seeing as how it’s the FBI, I’m sure they’ll do nothing.

MSNBC’s Joy Reid similarly lied and claimed her old blog which shared the 911 film Loose Change and made comments said to be derogatory towards homosexuals was “hacked” but never admitted to the lie and was never held to account.

Such prosecutions are reserved only for political dissidents like General Mike Flynn and Roger Stone.