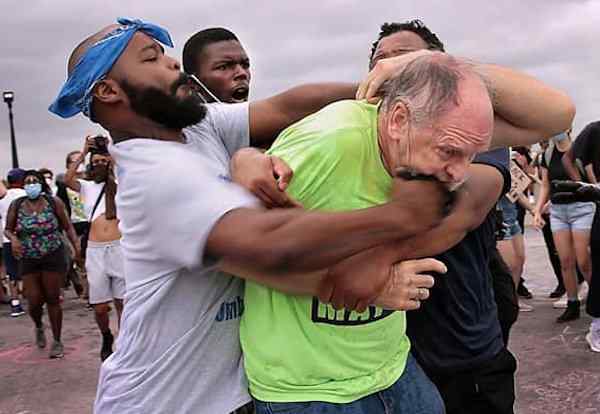 (Gateway Pundit) – Last week The Gateway Pundit organized a prayer rally at the Statue of St. Louis on Art Hill on Saturday morning in Forest Park.

In response to our prayer rally violent leftists and Black Lives Matter organized a counter rally and smeared the Catholic Prayer rally as a KKK event.

For the record the KKK, a Democrat Party offshoot, targeted and killed Catholics.

We have covered the rally extensively here at The Gateway Pundit. Several priests were at the St. Louis Statue. Several Catholics were at the statue. And dozens of violent leftists and Black Lives Matter activists showed up to disrupt and hurl profanities at the Catholics and Christians assembled at the statue of St. Louis.

Here is one video from the rally during our praying.

Several Catholics remained at the statue after the prayer service and several leftists were there to cause trouble.

At one point a 61-year-old Catholic man from St. Louis was jumped by the violent leftists and Black Lives Matter activists.

On Monday night we spoke with that man named “Paul” and he described his horrific ordeal.

We agreed with Paul that we would not use his last name in our article.

Paul is a devout Catholic and a devotee of Saint Louis. He has attended several prayer rallies at the monument in Forest Park the last two weeks. There are several local Catholics who recite a rosary nightly at the statue.

Paul was participating in some of the chanting at the statue when he was told by the leftist activists, “You’re not welcome here.” Paul added, “That’s when the radical Muslims said, ‘That’s the KKK!’” So Paul and several other Catholic men moved over to the other side of the statue.

That is when Paul said the far left activists and members of the Regional Muslim Activist Network attacked him. “I was trying to stay away from the guy who hit me because he was hitting anybody he could. There were about four white people and we were huddled together and they came over. They said no you don’t get it. You’re not welcome here!”

That’s when the violence started. The leftists pushed Paul and then grabbed one of the Catholic men by the throat and held him up against the statue. Another man said to me, “When he hits him. I’m hitting you.” Paul said then some white guy was pouring pink liquid on his head so Paul went after the white guy and knocked the liquid out of his hand. Then Paul says that’s when they jumped on him, “The next thing I know there were people on my back and I got hit. And the next thing I know I was coming to. They actually knocked me out. Yeah, it knocked me out.” Paul says they got photos of everything else except him on the ground by the St. Louis statue unconscious.

They beat him with brass knuckles.

The thugs broke his glasses. He went to the ER to get a brain scan and to get his jaw looked at.

Paul then described how when he came to there were protester “medics” there to help him. These so-called “medics” are a typical addition to many far left rallies. Their purpose on this occasion was to attend to Catholic victims after they are beaten unconscious by leftist protesters. Two “escorts” then offered to walk him back to his vehicle. These are also far left activists who pretend to be there to care for people who are beaten unconscious or hurt in the violence. This is common today at numerous rallies across the country. The rallies are highly organized and well funded.

When Paul showed the “medics” his busted lip they offered him a Band-Aid. They were expecting violence. They always do. Paul says, “They were bullshit medics.”

Paul also said the organized left had walkie-talkies and were communicating with each other.

Paul said his escort was a Teamster.

Paul said, “They get their heavy to create an incident and beat somebody’s head in. Then they get that person to leave by giving them their “medical attention.” The left only had the medics there because they knew they were going to be beating heads in. This is really sick.”

And the sickest think is these “medics” and “escorts” believe they are the good guys.

Paul is recovering this week at his home in St. Louis.