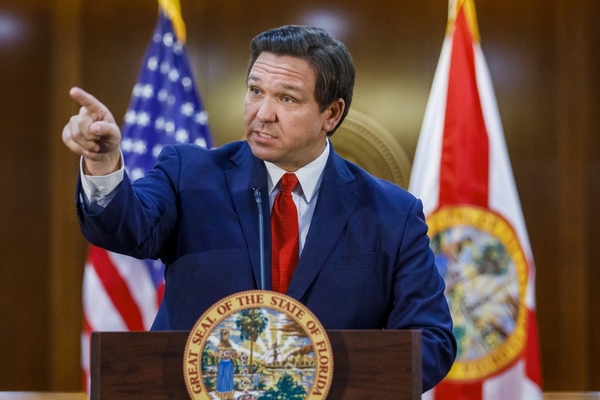 (breitbart) – Florida Gov. Ron DeSantis expressed optimism Friday regarding his wife’s battle with cancer, stating he is hopeful First Lady Casey DeSantis will be cancer-free in 2022.

“We’re not out of the woods… She’s a public figure, a lot of people care about her, and a lot of people have been praying for her, and that makes a huge difference to us, and we really appreciate it,” Desantis explained during a press conference in Lake Butler, documented by the Hill.

“At the same time, you know it’s a medical issue for the family, which, it’s generally a private thing,” the governor continued. “So we felt it was important to let people know she was dealing with it at the outset.”

DeSantis later shared his optimism regarding his wife’s progress in her battle with breast cancer.

“We’re not through with it,” he explained. “We’re getting closer to the end…Our view is that 2022 will be the year where we can say that she is cancer-free, and that will be something that will be really important.”

Florida Agricultural Commissioner Nikki Fried (D), who is running to be the Democrat nominee in the upcoming 2022 gubernatorial race in the Sunshine State, recently criticized DeSantis, suggesting he was absent as coronavirus cases surged, Breitbart News reported.

DeSantis noted that they put out a schedule as well, but his critics assume the governor is not doing anything if he is not holding a big press conference. On Wednesday, when there was nothing on the calendar, DeSantis said he caught word that he was apparently on vacation.

“And I just looked at my wife. I’m like, going to the hospital with you is not a vacation for you, I know that. And it’s not a vacation; this is something that as a husband, I think that I should be doing,” he said.

On Friday, at his press conference, DeSantis spoke regarding the critics who claimed he was “vacationing.”

“A lot of these people, some in the media, but a lot of these politicians who are trying to get some traction, you know they were saying ,’Oh, he’s out vacationing’ and all this stuff,” DeSantis stated.

Desantis said Casey, 41, whose breast cancer diagnosis was made public on October 4, has good days and bad days.

“She has times where she is really good, and then sometimes it really takes a toll. It’s not like it’s just the same every day,” he explained.