(breitbart) – Nearly 200,000 illegal aliens living in New York will soon receive $2.1 billion in taxpayer-funded stimulus checks and unemployment benefits thanks to a budget agreed upon by Gov. Andrew Cuomo (D).

While more than a million jobs have been lost in New York and an estimated 80,000 New York businesses may not make it to the end of the Chinese coronavirus pandemic, Cuomo and elected state Democrats agreed on a budget deal that provides billions to illegal aliens at the taxpayer’s expense.

Specifically, according to the New York Times, the state budget includes $2.1 billion in taxpayer-funded one-time payments in the form of stimulus checks and unemployment-style benefits for about 187,000 illegal aliens — about $1.1 billion more than small businesses are set to get in grants and tax credits after being forced to close by Cuomo’s economic lockdowns.

The budget also provides about $2.3 billion in federal funds for tenants who have been behind on rent as a result of Cuomo’s lockdowns, just $200,000,000 more than what illegal aliens will receive.

“Democrats are about to pass a budget that raises taxes on New Yorkers and businesses by $4 billion while enacting a $2 billion fund that will provide $25,000 payouts to illegal immigrants,” Langworthy said in the statement:

The few brave Democrats who have dared to speak out against this outrageous proposal are being called racists by their own party. While many will appreciate the irony in Democrats turning on each other, the terrifying truth is our state has been hijacked by extreme leftists where racism is cheapened and once again, those who break the law are given priority.

New York, and particularly New York City, has been ravaged by Cuomo and Mayor Bill de Blasio’s (D) economic lockdown measures that have now been in place for more than a year. Historic venues, hotels, restaurants, nightclubs, and local neighborhood spots have had to close their doors for good as a result of the lockdowns. 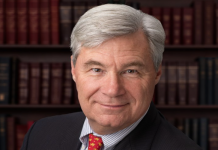 Shocking: How bad are things in Democrat run San Francisco – Must See

Shocking: How bad are things in Democrat run San Francisco –...

Breaking: Hunter Biden Gets Great News – This Is Absurd