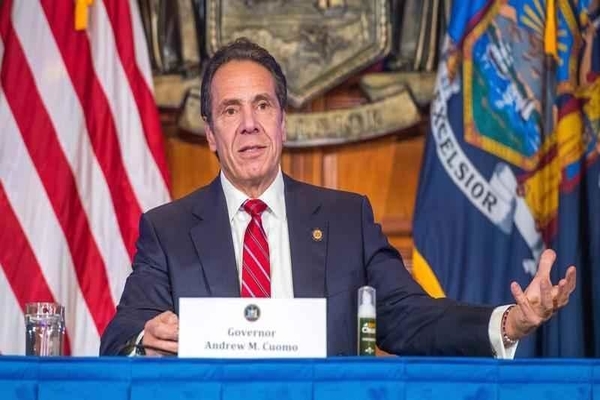 (foxnews) – A former aide to Gov. Andrew Cuomo is accusing the embattled New York leader of sexually harassing her — including unwanted kissing and touching — and says his top female staffers “normalized” the behavior.

Lindsey Boylan, the former deputy secretary for economic development and special adviser to the governor, said Cuomo constantly sought her out and had staffers arrange meetings with her, where he made inappropriate comments.

“Let’s play strip poker,” Boylan said Cuomo remarked on a flight from an event in October 2017, according to an essay she wrote on Medium published Wednesday.

A statement from Cuomo’s office on Wednesday denied the claims.

“As we said before, Ms. Boylan’s claims of inappropriate behavior are quite simply false,” press secretary Caitlin Girouard said.

Boylan described another encounter in December 2016, when she said Cuomo arranged through a handler to meet her in his Albany office, to which she agreed reluctantly. She said he gave her a tour of his office, “smirked” and showed off a cigar box he said was given to him by former President Bill Clinton while he served as the secretary of Housing and Urban Development.

Boylan said she interpreted that to be an innuendo referencing the affair between Clinton and his then-intern Monica Lewinsky in the mid-1990s.

She said she was warned by other staffers when she joined Cuomo’s administration in 2015 to “be careful around the Governor.”

Boylan said his behavior “was all so normalized — particularly by Melissa DeRosa and other top women around him — that only now do I realize how insidious his abuse was.”

She also alleged that shortly before the office incident, that made her feel uncomfortable, Stephanie Benton, director of the governor’s offices, told her in an email that Cuomo suggested she look up images of Lisa Shields — his rumored former girlfriend — because “we could be sisters” and told Boylan she was “the better looking sister.”

“The Governor began calling me ‘Lisa’ in front of colleagues. It was degrading,” Boylan wrote, including screenshots of the email exchange between her and Benton.

Boylan said in another incident, this time in Cuomo’s New York City office, he kissed her on the lips.

“I was in shock, but I kept walking,” Boylan wrote.

“The idea that someone might think I held my high-ranking position because of the Governor’s crush’ on me was more demeaning than the kiss itself.”

In her statement denying the claims, Cuomo’s office also released a statement from individuals they said were also on the same flights — John Maggiore, Howard Zemsky, Dani Lever and Abbey Fashouer Collins. That statement said, “We were on each of these October flights and this conversation did not happen.”

Boylan first accused the governor of harassment last year but did not elaborate on her experiences at the time.

Boylan wrote in her Wednesday essay that she expects “the Governor and his top aides will attempt to further disparage me, just as they’ve done with Assemblymember Kim” — who came forward in recent weeks with his own accusations against the governor of bullying and threatening him.

Boylan did not immediately respond to Fox News’ request for comment.

Stefanik had previously called for Boylan’s allegations against Cuomo last year to be investigated further but it amounted to nothing.

“It is an inexcusable disgrace that almost every other elected official in New York State quietly brushed this serious and credible allegation under the rug,” Stefanik said in a statement Thursday.

“Sexual harassment and sexual abuse in the workplace is not a political issue, it is about right and wrong.”

“Governor Cuomo must immediately resign,” she continued. “And any elected official who does not immediately call for his resignation is complicit in allowing a sexual predator to continue leading the great state of New York.”

The recently detailed allegations by Boylan triggered renewed calls for Cuomo to resign as he faces intense scrutiny and pressure following explosive revelations that his administration concealed accurate nursing home death counts in the midst of the COVID-19 pandemic, stonewalling a federal investigation by the Justice Department into elder care facilities in four states, including New York.