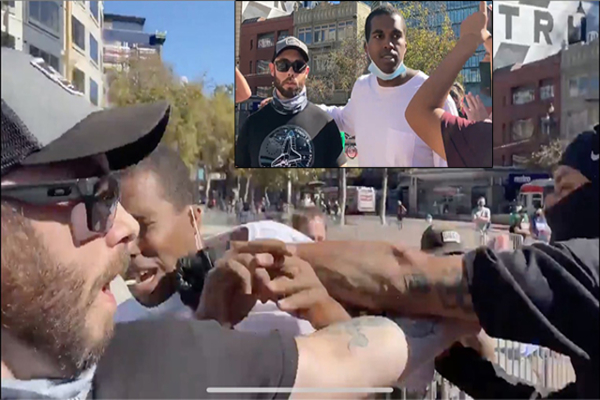 (informationliberation) – Antifa militants in San Francisco were filmed violently attacking a Black man and hurling racial abuse at him for putting his arm around a Trump supporter and walking with him to shield him from a rabid leftist mob.

Free speech warrior Philip Anderson was punched in the face twice on Saturday at a rally against Big Tech censorship.

At least two of Anderson’s front teeth were knocked out.

The assailant was not arrested.

“Get the f**k out of here, you’re not welcome here!” a leftist militant shouted.

“Cry about it, cry about it,” an irate female screamed after he was punched. “You just got your shit rocked, bitch!”

“Go away bitch n*gga! Get the fuck out, no racists allowed!” a woman screamed at the Black man.

“Antifa attacked me for no reason,” Anderson said on Twitter. “These people are racist terrorists.”

Anderson recorded a video from the hospital asking Joe Biden if he still thinks Antifa “is just an idea.”

“Hey Joe Biden, I have a question for you, you said Antifa is just an idea, this is what the idea you’re talking about — Antifa — this is what they did to me,” Anderson said, holding up one of his teeth.

“I’m at the hospital right now because of Antifa,” Anderson said. “So, I just wanted to ask you, do you still think after seeing this that Antifa is just an idea?”

Anderson shared another shocking video of police rushing his group away from the violent mob.

“Antifa tried to kill us all,” Anderson said. “The Police saved our lives!!! BACK THE BLUE!!!”

A GoFundMe was launched to help Anderson fix his teeth.

If an irate mob of Trump supporters attacked an innocent Black man and hurled racial abuse at him for shielding a Biden supporter it would be the top story in the country!