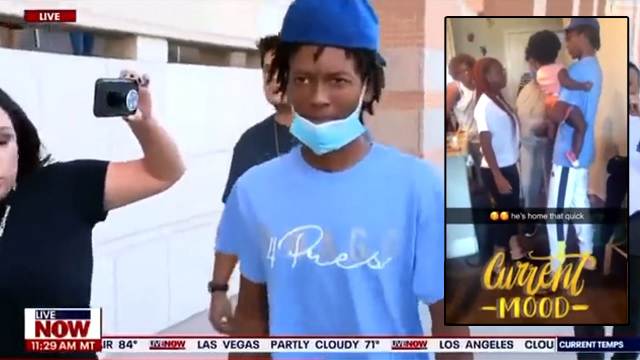 From The Daily Mail, “Arlington school shooter PARTIES at home with family after being freed on $75k bond while his victims remain in the hospital: Gunman, 18, walks free one day after shooting 15-year-old ‘bully’ seven times’ AND teacher who broke up brawl”:

The teenage gunman who opened fire in an Arlington, Texas, school on Wednesday celebrated at home after being released on a $75,000 bond while his victims, a 15-year-old boy and a 25-year-old teacher, remained in the hospital, one of them clinging to life.

Timothy George Simpkins was being held on a $75,000 bond on three charges of aggravated assault with a deadly weapon but the 18-year-old walked out of Tarrant County Jail on Thursday afternoon. A bondsman met the bail terms on Thursday, posting at least some of the full amount, and he walked free.

On Wednesday, he pulled a gun from his backpack and shot a 15-year-old boy ‘seven or eight times’, shot teacher Calvin Pettitt in the back and grazed a teenage girl before going on the run from Timberview High School. He was angry about a fight that had just happened where the 15-year-old boy repeatedly punched him.

Teacher Calvin Pettitt, pictured center, was shot in the back while trying to break up the fight and remains hospitalized.

Simpkins said nothing as he strode out of the jail on Thursday in a blue t-shirt, matching baseball cap worn backwards, and jeans. It’s unclear why he has been charged with aggravated assault and not attempted murder or more serious charges, or why the judge granted him bail.

Hours later, one of his relatives boasted on social media that he was already home and shared videos from a family gathering inside a home. He was shown holding a baby, standing in his kitchen, chatting to relatives.

Meanwhile, teacher Calvin Pettitt – who was shot because he tried to break up the fight – remained in the hospital, with a bullet in his shoulder that narrowly missed his aorta.

The 15-year-old boy, who has not been named, is also still in the hospital in a critical condition.

Pettitt’s horrified sister, upon learning the shooter had been released, tweeted: ‘How can this keep managing to get worse?’

The Tarrant County District’s Attorney still has not filed a case against the teen, and his next court date has not yet been scheduled.

Perhaps next he can accuse the teacher of calling him the “n-word” and collect $137 million!