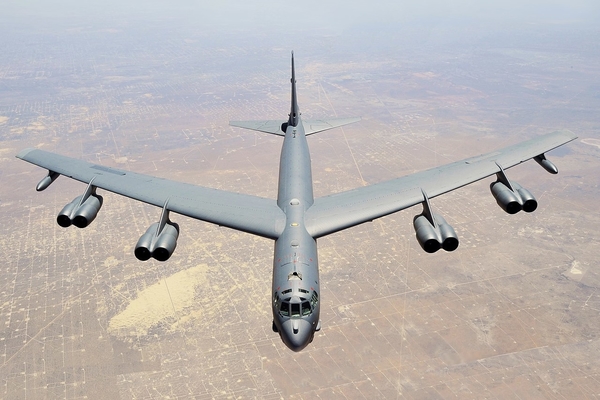 (UPI) — Two B-52 “Stratofortress” bombers of the U.S. Air Force arrived in the Middle East in a show of short-notice force, U.S. Central Command said on Wednesday.

(breitbart) – CENTCOM’s announcement did not specify a destination for the planes, but emphasized their in-flight refueling capabilities and noted that their “deliberate appearance” was meant to “underscore the U.S. military’s commitment to regional security and demonstrate a unique ability to rapidly deploy overwhelming combat power on short notice.”

The B-52s are part of the 5th Bomb Wing, headquartered at Minot Air Force Base, N.D. The deployment of bombers was CENTCOM’s third to the Middle East in the past 45 days.

On Dec. 10, two B-52s from Barksdale Air Force Base, La., joined aircraft of Saudi Arabia, Bahrain and Qatar in a show of force in the Persian Gulf.

In November, two B-52s bombers flew over the Middle East in a short-term mission.

The deployments are part of a buildup of tensions as the Middle East prepares for possible retaliation by Iran for the assassination of its top nuclear scientist, Mohsen Fakhrizadeh, by Israel in November.

U.S. officials have also cited the potential for retaliation from Iran on the first anniversary, on Jan. 3, of the death of Iranian Maj. Gen. Qasem Soleimani in a U.S. cruise missile strike by the United States in Iraq.

Both Israel and the United States have positioned missile-carrying submarines in the area, and the U.S. Navy’s Nimitz Strike Group, which includes the aircraft carrier USS Nimitz and over 60 aircraft, has been stationed off the East African coast.