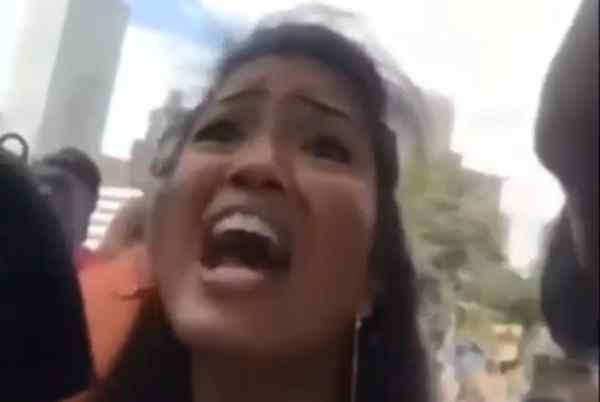 (Gateway Pundit) – Leading conservative activist and entrepreneur Michelle Malkin was attacked by Antifa and Black Lives Matter thugs Sunday at a “Back the Blue” rally in support of police at the Civic Center amphitheater in Denver. Ironically, the Denver police on the scene did not intervene at first, apparently under orders by police Chief Paul Pazen who marched with BLM protesters last month.

Malkin says she was not hurt in the attack in which Antifa and BLM thugs rushed and took over the stage, though video shows her being roughed up. The attack was recorded on Malkin’s livestream Periscope video.

Above: Screen image of one of the Black Lives Matter and Antifa attackers.

“Yes you can watch how it all unfolded here ==> @DenverPolice Chief Pazen, who marched with BLM last month, let pro-police patriots get beaten and silenced==>”

After calling out Colorado Governor Jared Polis (D) and Chief Pazen, Malkin put out an SOS to President Trump, “So @jaredpolis @DenverPolice Chief Pazen, are you ok with pro-police patriots being swarmed, targeted and assaulted in a clearly orchestrated attack??? I caught it all on video and recorded the faces of the brutal animals. Please @realDonaldTrump – we need LAW & ORDER!!! S.O.S!”

Videos of Antifa and BLM attack on Malkin taken from her Periscope feed:

Excerpt from the Denver Post report on the attack on the rally:

Dueling rallies in downtown Denver devolved into chaos and some violence Sunday afternoon as protesters crashed a pro-police rally in Civic Center. The anti-police protesters greatly outnumbered the pro-police crowd, and moved into their rally’s space in the park’s amphitheater shortly after the demonstration supporting law enforcement started around 3 p.m. The protesters banged drums, blew whistles, clanged pots, clapped and shouted obscenities to drown out the pro-police rally, where a band had been playing music to a small crowd. The chaotic clash between groups led to some violence, with several people throwing punches in isolated disputes. Law enforcement officers attempted to form a line around the two groups, but could not completely separate them. After about an hour, most of the pro-police demonstrators left the plaza, and police also began to retreat. The anti-police protesters followed officers as they retreated and at least one officer fired pepper spray into the crowd of protesters. It was not immediately clear what prompted the use of the spray.

The Post reported Chief Pazen asked the organizers to not hold the rally.