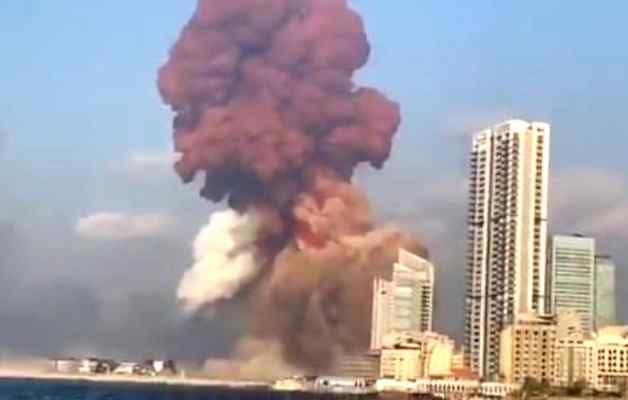 (thegatewaypundit) – Hezbollah’s bomb of choice is ammonium nitrate. The same substance that blew up a large section of Beirut last week was used by Hezbollah numerous times before against the US and around the world.
The Isreali News source WorldIsraelNews.com reported this morning:

The ammonium nitrate that blew up last week in Beirut was owned by the Hezbollah terror group that intended to use the material in a war against Israel, a top investigative reporter said Friday.

The leader of the Iran-backed terrorist organization, Hassan Nasrallah, is the person at the top responsible for the material having been in Beirut’s port before the massive explosion last week that claimed over 150 lives, wounded 6,000 people and left a large part of the Lebanese capital in ruins, said Channel 13 Arab Affairs reporter Zvi Yehezkeli.

Germany – May 2020, the German government was tipped off about warehouses in the south of the country where Hezbollah stashed hundreds of kilograms of ammonium nitrate.

UK – September 2018, a large cache belonging to a Hezbollah cells, containing about 3 tons of ammonium nitrate, was found at four locations in North London.

Cyprus – May 2015, Hussein Bassam Abdallah, a Canadian/Lebanese Hezbollah agent was found with 8.2 tons of ammonium nitrate, stored in ice packs, in his home.

Thailand – January 2012, Atris Hussein, a Swedish/Lebanese national and a member of Hezbollah, was arrested with a 4.5 tons a mixture of ammonium nitrate stored in his house in Samut Sakhon.

US – May 2009, Ali Kourani, a Bronx US/Lebanese national and a member of Hezbollah/Islamic Jihad, traveled to Guangzhou, China to purchase large amounts of ammonium nitrate.

Lebanon – October 1983, Hezbollah blows up the US marines barracks in Beirut.
Advertisement – story continues below

In 1983 and again in 2020, Hezbollah is responsible for massive bombs exploding in Beirut, Lebanon.

The explosion in Beirut should be a wake up call to the US and other western nations. Two Hezbollah members were recently arrested in the US. Both these individuals had connections to Hezbollah’s chemical of choice. Both are convicted members of a US based Hezbollah network.

Ali Korani Samawar is currently serving a 40 year sentence. Samer El Debek, was arrested In June 2017 and was charged with traveling to Panama to conduct surveillance and prep for a terror attack on the Panama Canal. Fadi Yassine, is another Hezbollah operative who is currently serving a 57 month sentence for trafficking weapons to Hezbollah in 2017.

The bomb blast in Beirut is a warning for the West.
As long as Hezbollah is in Beirut, the world is at risk.