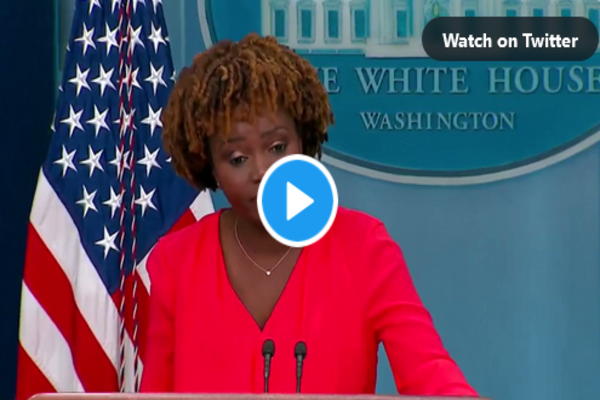 (breitbart) – White House Press Secretary Karine Jean-Pierre claimed that the administration has taken “unprecedented action” to secure the border–even as we face an ongoing border crisis.

White House Press Secretary Karine Jean-Pierre defended the Biden administration’s record on immigration at a press conference, answering a reporter who asked about the border crisis by remarking, “We understand that we have work to do, we understand that, and we have been doing the work to do that.”

She continued, “We have taken unprecedented action over the past year and a half to secure our border and rebuild a safe and orderly processing system.”

One self-proclaimed illegal immigrant told a Fox News reporter that the border is “open, not closed. The border is open.”

He even went on to say, “Everyone believes the border is open. It is open because we enter … no problem.” He also admitted that “we came illegally, not legally.”

As of the end of July 2022, a whopping 4.9 million illegal immigrants had entered our country since the start of the Biden administration. This figure does not include the number of illegal immigrants who have entered America in August or the first two weeks of September.

In July 2022 alone, 2,071 pounds of fentanyl, the equivalent of 469 million lethal doses, and 12,989 pounds of methamphetamine were seized at the southern border.

There was also an increase of 325 percent in the number of border apprehensions in July 2022 when compared to the average number of July apprehensions during the four years of Donald Trump’s presidency.

While many of these immigrants are released into California, Arizona, New Mexico, and Texas, it is not just border states that are hurt by the Biden border crisis.

Even Portland, Maine, is struggling under the weight of an influx of migrants, despite being over 2,000 miles away from our Southern border. The Northeastern city has run out of room and resources for new arrivals, most of whom have come from Africa.