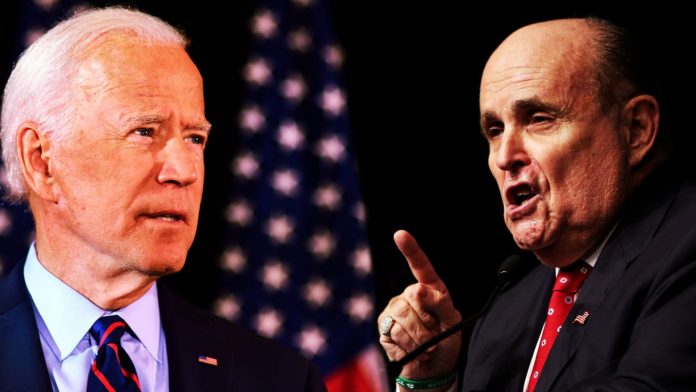 (Gateway Pundit) – Trump’s personal lawyer Rudy Giuliani taunted the Deep State-Democrat-media complex Sunday morning and said he will be sharing evidence he “has garnered through hundreds of hours of research.”

Rudy Giuliani traveled to Hungary and Ukraine a couple weeks ago and met with officials in Kiev in his ongoing efforts to expose corruption and pay-to-play schemes involving the Biden crime family and other Democrats.

Mr. Giuliani revealed last Monday morning on Steve Bannon’s radio show “The War Room: Impeachment” that he was working to release a report on his findings from his latest trip to Europe to Attorney General Bill Barr and GOP lawmakers in Congress.

A few hours after his initial tweet on Sunday, Rudy began dropping bombshells one tweet at at time.

Rudy said Victor Shokin, the Ukrainian prosecutor general investigating Burisma was not only fired after Biden threatened to withhold aid from Ukraine, but that he was poisoned and barely survived the poisoning.

“Shokin holds documents proving money laundering by Burisma & Biden’s,” Giuliani said. “He was fired due to VP Joe Biden’s threat not to release $1 billion in vital US aid.”

Giuliani then said, “Shokin’s medical records show he was poisoned, died twice, and was revived.”

“Lots of heads will roll in Ukraine if this opens up,” he added.

“All of a sudden Shokin gets this communique from Latvia that shows a $16 million laundering transaction — classic laundering transaction,” Giuliani said. “It goes from Ukraine, to Latvia, it’s disguised as a loan to another company to ‘Wirelogic’ I believe — it then goes to Cyprus, gets disguised as another loan — this is called “Digitech” then it’s dispersed as payment as board fees,” he added.

Giuliani added, “Now you don’t make two loans to make board fees unless you’re laundering the money. $3 million gets to Hunter Biden in that way.”

“That is a straight out violation of a money laundering statute,” he said.