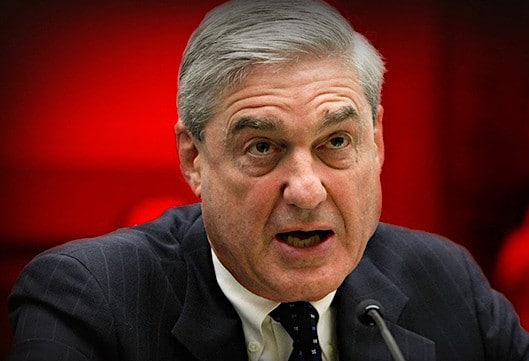 (Gateway Pundit) – Never mind the Russians. Former FBI directors Robert Mueller and James Comey and their Deep State masters are the real threat to our republic.

Aided by a complicit media and feckless representatives in Washington DC, Mueller and Comey have so far gotten away with interfering in at least two presidential elections and they may be at it again in 2020.

Their playbook was simple.

In 2008 FBI Director Mueller was so successful at getting a corrupt progressive nobody, U.S. Senator Barack Hussein Obama, into the White House that his successor, Comey, thought he could use the exact same playbook to do the same for Hillary Clinton in 2016.

The playbook was actually used first in the Valerie Plame scandal known as Plamegate.

The first step involves protecting the Deep State candidate by projecting their crimes onto a chosen patsy.

2008 election: Obama had a history of receiving bribes and favors from convicted felon Tony Rezko: Rezko’s partner, Saddam Hussein bagman Nadhmi Auchi: and former Chicago cop Daniel T Frawley, who claimed in an email to have passed $400k in cash bribes through Rezko to Obama.

In order to divert attention from Obama’s criminal dealings with Rezko and Auchi, FBI Director Mueller opened an investigation into Rezko’s dealings with Illinois governor Rod Blagojevich and simultaneously swept Obama’s crimes under the rug. The five year “investigation” of Blago came to an abrupt end when the Justice Department leaked information to the Chicago Tribune in order to avoid having to arrest Obama’s presidential election campaign co-chairman, Jesse Jackson Jr., for trying to buy Obama’s senate seat.

Blago was arrested, Jackson was not.

2016 election: Secretary of State Hillary Clinton made a lucrative deal for the Clinton Foundation by illegally selling the Russians control of twenty percent of U.S. Uranium production through Uranium One. This was concealed by Secretary Clinton’s conducting business on a private server and destroying the records when the deal was discovered.

In order to divert attention from Clinton’s criminal dealings with Russia, FBI Director Comey cleared Clinton of her crimes involving the illegal server she set up and the destruction of the records kept on that server. Then Comey helped promote the phony Steele dossier, that Clinton paid for and used to paint Trump as a Russian operative.

Presumably Clinton would have moved on to become President in 2016 and Trump would have been facing criminal prosecution.

However, as Comey learned the hard way:

Which brings us to Trump’s commutation of Blago’s sentence, and why this is so important.

Now that Blago is out of prison, he is free to talk about the crimes Obama committed in Illinois, how Muller covered them up, and how it all relates to Comey’s seditious acts that followed.

And they’re not Russian!

It’s like Blago said when he was trying to sell Obama’s senate seat, “I’ve got this thing and it’s f—–g “Golden”.

Only this time Blago will be selling the truth about Mueller and Comey.

No wonder the DC swamp and their media are freaking out over Blago’s release from prison.