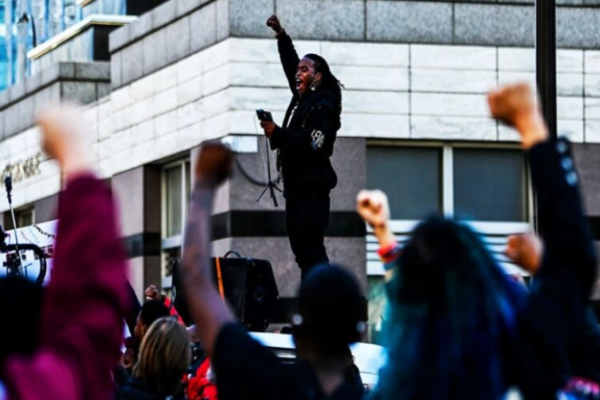 More than $1 million has been spent to erect fencing and security barriers on the part of the city of Minneapolis, which expects a new wave of left-wing rioting and destruction in the event that Chauvin is acquitted of killing George Floyd.

The protest occurred as legal authorities began jury selection in the trial of Chauvin, with potential jurors likely confronted with the protestors as they arrived at the Hennepin County Government Center. Jury selection was ultimately postponed for a day, with a judge waiting for the state court of appeals to determine if Chauvin should face charges of third-degree murder as opposed to second.

It’s expected that Chauvin’s legal defense team will point to evidence suggesting that Floyd died as the result of a fentanyl overdose, as opposed to Chauvin’s chokehold on the previously convicted violent felon. Chauvin’s lawyer will also cite training materials used by the Minneapolis Police Department that instructed officers to use knee chokeholds similar to that used by Chauvin.

Longtime residents of Minneapolis have pointed to the city as “unrecognizable” following months of riots and a spike in crime, having lost the high-trust and comunitarian spirit the Minnesota city was once known for.

In other news, a fatal shooting occurred on Sunday a short distance away from the neighborhood in which Floyd died in May. Several Minneapolis neighborhoods have become de facto “no-go” zones in recent months, with a depleted Minneapolis Police Department no longer able to patrol troubled communities in the Democratic city.

The trials of Thomas Lane, J. Alexander Kueng, and Tou Thao, three other officers involved in the arrest of Floyd, are slated to begin in August.