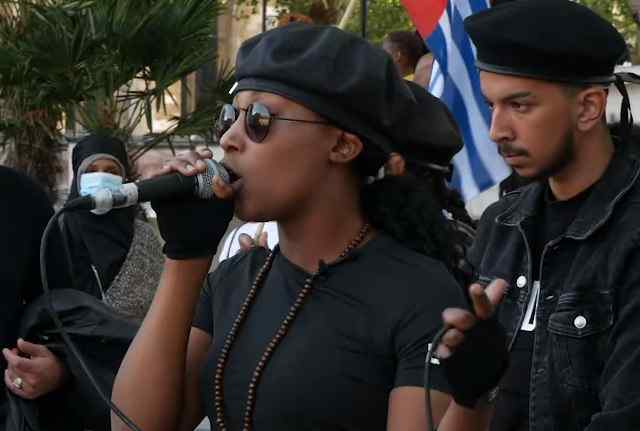 (Breitbart) – At a Black Lives Matter protest in London, an activist called for a revolution in the UK, demanding the establishment of a “Black Militia” to stand up to racism, which she claims “thrives on capitalism”.

On Sunday, hundreds of Black Lives Matter protesters marched from Marble Arch in Hyde Park to Parliament Square outside the Houses of Parliament in London.

In a Breitbart London exclusive video, one of the speakers at the rally — a black woman dressed in paramilitary-style garb — is seen leading chants of “take it to the streets… fuck the police” and “no justice, no peace”.

The far-left speaker said that she was not “scared of no terrorist group”, but added that: “The police is no different from the KKK. They stand around and protect statues and buildings instead of people.”

“They need to join the local council and litter pick too,” she proclaimed.

She also called for the creation of a “Black Militia” explaining that: “I’m not saying it because I want people to fear and think we’re coming violent. What we’re saying is: you push we push, you fight we fight. Peace is not peace until you recognise our life, and we’re not gonna lay down anymore.”

Addressing the accusations of antisemitism levied at the BLM UK organisation, the speaker said that it is not antisemitic to “say free Palestine”. She added: “Don’t let no Jewish man create a way to be unheard, to make you unheard. Silence is violence, if we keep silent we are also a part of that oppression.”

The leftist radical went on to pronounce that “British value does not exist because they took his values from all around.”

She concluded by pronouncing that there is “one solution: revolution!”

Brexit Party Leader Nigel Farage has described the Black Lives Matter movement in the UK as “a new form of the Taliban” for their attacks on British statues and historical monuments.

Last Week, Mr Farage said that the agenda of the movement is so radical that it would “would make Lenin blush”, warning that their true goal is not to achieve racial equality but rather to destroy Western civilisation.

“This is about all-out Marxism. It’s about the destruction of capitalism. It’s about getting rid of the nation-state as we know it. Of course, it’s about defunding the police,” the Brexit Party leader concluded.