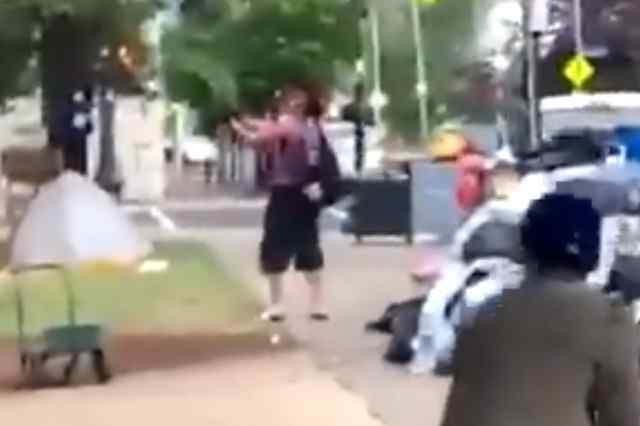 Police have confirmed that one person has died from their injuries.

The shocking shooting was captured on a Facebook livestream, which has since been removed, but multiple people captured the clip.

First responders were seen putting a victim on a stretcher into an ambulance, but it is unclear how many people were shot or their conditions.

“Officers cleared the park completely and have secured the entire area so homicide detectives can conduct their investigation,” LMPD spokesman Lamont Washington told the Courier Journal on Saturday evening at 11:27 p.m. “Detectives are trying to gather as much information as possible in order to identify all who were involved in the incident.”

Louisville Mayor Greg Fischer said in a statement Saturday evening that he is “deeply saddened by the violence that erupted in Jefferson Square Park tonight, where those who have been voicing their concerns have been gathered.”

“It is a tragedy that this area of peaceful protest is now a crime scene,” Fischer said. “My thanks to the first responders who assisted at the scene. I will have more to say tomorrow, as additional information becomes available.”

People have been gathering in that park for nearly a month to protest the death of Breonna Taylor, who was killed in the city during a drug raid in March. The city was also subjected to violent riots at the end of May and beginning of June after the death of a criminal in Minneapolis Police custody.

“We are currently working an active police situation at Jefferson Square Park,” Louisville police said in a statement.

The Louisville Police have not yet released any information about the suspect.

UPDATE: Shooter Is Member of the Movement

On Sunday morning local WDRB reported on the shooter.

The shooter is a member of the movement.

One witness told WDRB News that the alleged shooter told him, “We’re about to set this ‘B’ off,” before he heard a boom followed by four sounds. The witness then ran, he said, ripping his sock as he tried to seek cover. He said a bullet hit a metal pole as it went “straight past my face.” The witness said he was familiar with the suspected shooter. “A lot of people have had problems with this individual,” he said, adding that the person had been in at least three fights at the park.