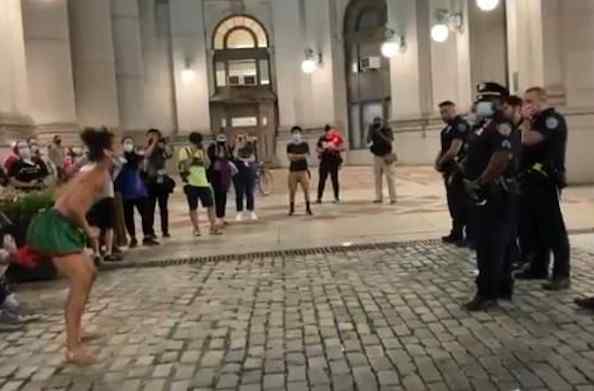 Trans activist: “You know a hairdresser has to go to school longer than you do. Half of you don’t even have a college education… You can’t even read a f**king history book. You should f**king know better. Traitor to your f**king race. You’re like a f**king black Judas.”

A Black Lives Matter militant on Tuesday evening proudly boasted over a megaphone that he wanted to murder NYPD police officers.

Kids still can’t go to school and governors are locking down their states again but these Black Lives Matter terrorists are allowed to gather in the streets and threaten to murder police officers.

Where is the DOJ?

There is zero equality under the law right now.

Left-wing terrorists can protest without social distancing, destroy businesses, shoot people in broad daylight, beat up motorists, burn buildings to the ground and loot without being prosecuted.

In contrast, people who want to go to work to feed their families are threatened with fines and jail time.