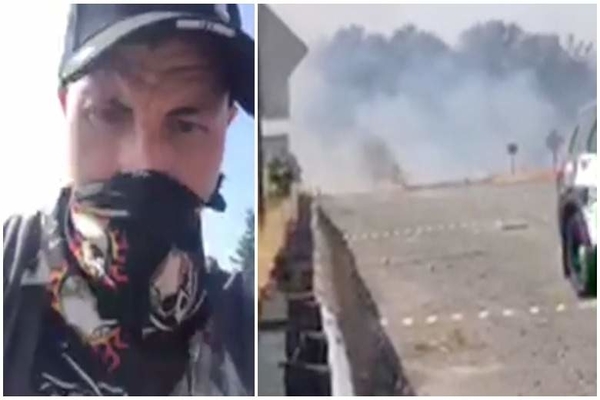 (heavy.com) – Jeffrey “Jeff” Acord was arrested in Puyallup, Washington, in suspicion of being connected to a fire that started in Washington. Police said on Twitter that he was caught starting a fire and Acord said he happened upon the fire while looking for a lost camera. He was previously arrested during a Ferguson protest in 2014 and he recently posted on social media about supporting Black Lives Matter, but not supporting looting and hurting local businesses. Acord’s name has gone viral on social media posts claiming he’s a member of “Antifa,” but his posts appear to show Black Lives Matter supporter.

On September 9, a 36-year-old man from Puyallup, Washington was arrested on suspicion of starting a fire on SR-167, Q13 Fox reported. Although the article didn’t name him specifically, it did link to a video that Jef Acord posted on Facebook, noting that he was the man arrested and he had been filming live on Facebook before his arrest. In his video, Acord said he happened upon the fire while looking for a lost camera.

He said he pulled over to call the fire in, and told the police that he wished he had a fire extinguisher on him when he pulled up. “I’ve put out fires before man,” he could be heard saying, talking about how it was a house fire back then.

“The smallest thing can start a fire,” he said on the video. “…That wind’s not helping right now… It looks like it’s spreading pretty quick, dude. I’m getting concerned… I’m more concerned about the f* houses right there.”

He said that he was glad he called in the fire when he did, as it might have helped give them extra time to respond early. He later said he lost an expensive camera the day before and was out trying to find it. He told police he was up and down the freeway four or five times that day looking for his camera and had walked four or five miles looking for it.

At one point about 17 minutes into the video, you can here an official saying in the background, “I’ve got lots of concerns about why you’re here today.”

Police had a different story about what happened. Ryan Burke, a Washington State Patrol Trooper, told Fox Q13 that Acord was found in the SR 167 median, after police had talked to him earlier when he was walking on the highway while carrying a lighter.

On Twitter, Burke wrote that a 36-year-old Puyallup resident was “caught in the median on [email protected] setting a fire!”

About 29 minutes into Acord’s live video, you can hear police questioning him about his lost camera and exactly where he was searching.

Acord is listed in Pierce County, Washington’s website as being booked into Pierce County Corrections on September 10 at 4 a.m. The arresting agency is listed as Puyallup Police Department. The listed charge is “Burglary 2.”

Bellingham Metro News reported that he was being held on a $1,000 bond and was suspected in other possible fires in the area. Before he was transferred to another jail, his charge was listed as “Reckless Burning 2nd Degree.”Acord Was Previously Arrested During the Ferguson Protests, & on His Video He Said It Was Because He Forgot His Gun Was in His Backpack

Acord Was Previously Arrested During the Ferguson Protests, & on His Video He Said It Was Because He Forgot His Gun Was in His Backpack

Around 34 minutes into his Facebook live video, Acord talks about how some people thought he was trying to blow up his car during the Ferguson protests. The officer asks why they thought that.

“Well because the officers there needed a story man…,” Acord responded. “…I was out there to get footage… My girlfriend at the time was like, ‘Hey, you should go out there and shoot some footage.’”

He said that he had also been camping and shooting his guns the weekend before, and he forgot to remove one of his guns from his backpack before going to the protest.

“So I was shooting the weekend before,” he says on the video. “This was on a Monday that it happened. … After I had done my weekend camping trip… I had put my 9 mil back in my backpack loaded… I didn’t have my concealed carry permit, and so I was honest with the cop.”

He said that when the officer asked him if there was anything in his bag, he said he had left his pistol loaded in there by accident. He was arrested for illegally carrying a concealed weapon, and he told the officer that he lost his gun rights for two years over what happened.

KOMO News reported in 2014 about what happened to Acord, noting that he had a knife in his backpack, a box of ammunition, an assault rifle, shotgun, and a box of fireworks. The article said that he admitted to police that he had a loaded gun without a permit, and officers had contacted him after he was seen near his car with a road flare. Bail was set for $10,000.