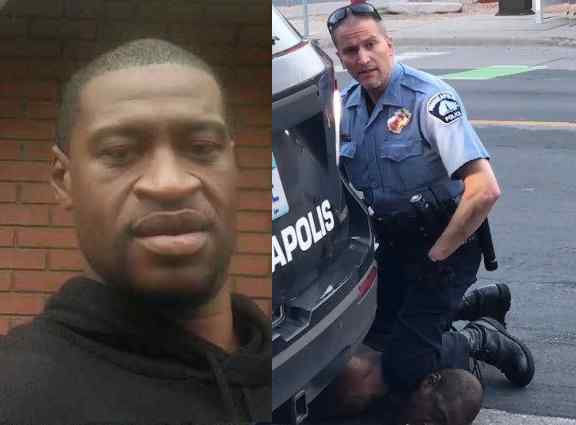 (Gateway Pundit) – The transcript from the body camera worn by J. Alexander Kueng shows clear evidence that George Floyd was suffering respiratory distress before police laid hands on him. He died from a Fentanyl overdose, not from being choked out by Minneapolis police. This news will not bring joy to the crazed, leftist mob screaming to lop off the heads of the Minneapolis police officers who stand accused of “murdering” George Floyd and little attention has been paid to the transcript since its release on July 7. I hope to correct that oversight.

First a note about Officer J. Alexander Kueng. He also is a black man. He was adopted shortly after birth by a white woman and single mother. Can’t have that story out there. Simply does not promote the meme that white Americans are inherently and irredeemably racist. How can a racist white woman be a loving mother to a black child? Racists don’t do that.

Above: Officer Kueng and George Floyd

Once you read the transcript you will understand why the Minnesota Attorney General withheld the video evidence from the public and why the defense attorneys are trying to get the information out–it exonerates the police.

The incident starts with a store manager reporting that George Floyd had just given him a counterfeit bill.

The two officers (Kueng and Thomas Lane) go outside and begin the investigation by trying to get George Floyd out of his car:

Floyd was not cooperative. He was disoriented and not acting rationally. Floyd was accompanied by another black man. In contrast to Floyd, the other gentleman followed police instructions:

George Floyd was not passive nor cooperative despite media claims to the contrary. The video that fueled outrage across America tells a very misleading story. The words of the transcript are not lies.

In the next relevant bit of conversation, Floyd concedes that he passed a bad bill to the shop owner who called the police and admits he was not following police instructions.

On page 12 of the transcript we get the first evidence that Floyd is high on something and is “foaming” at the mouth. Officer Kueng is very concerned about Floyd’s erratic behavior:

Floyd claims he was “hooping” earlier. According to the Urban Dictionary, “hooping” refers to smuggling/transporting something that is inserted in one’s rectum.

Floyd’s erratic behavior escalates as Officer Kueng and Lane try to put him in the police car:

Pages 15-21 of the transcript record the futile effort of the Officers to get Floyd into the police car and Floyd’s drug-induced frenzy and paranoia.

On page 22 of the transcript Floyd starts to claim that he cannot breath. He has not been placed on the ground. In fact, he ASKS THE POLICE TO PUT HIM ON THE GROUND. Cops are not Docs. They do not have magical powers to diagnose whether or not someone is actually having a medical emergency or faking it. Up to this point in their interaction with George Floyd, they had little evidence to trust anything Floyd said:

The bottom line is clear–Floyd’s respiratory crisis was caused by the Fentanyl he had ingested before the police showed up on the scene. That evidence is quite clear in the autopsy report. Those who have rushed to judgment in condemning the Minneapolis Police Department will have to do some major mea culpas.