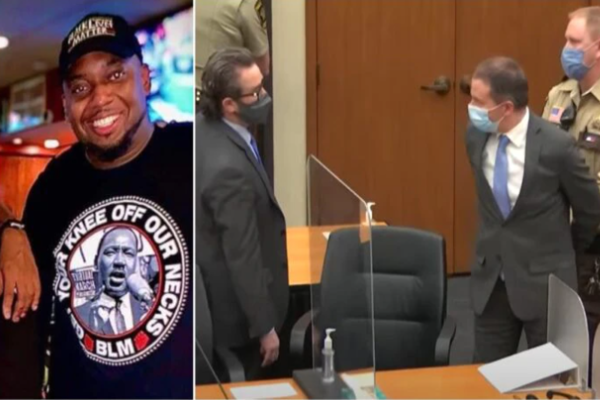 (bigleaguepolitics) – A Black Lives Matter (BLM) activist is admitting that he misled the judge to remain a juror in the Derek Chauvin murder trial, and he is urging others to do the same, to get on juries in order to “spark some change.”

Juror #52, who has since been identified as Brandon Mitchell, told Judge Peter Cahill that he had no previous knowledge of the George Floyd civil case ruling to stay on the jury. Floyd’s family received a payout of $27 million because their crackhead serial felon relative died during a police encounter last year.

Two jurors were dismissed from the case because they honestly told Judge Cahill that knowledge of this $27 million payout would bias them from adequately serving in their role on the jury. Mitchell was adamant that he would not be biased and knew nothing of the details of the case.

However, Mitchell can be seen in August 2020 wearing a BLM shirt with the slogan, “Get your knee off our necks,” which refers directly to Floyd’s case. A recent appearance on a radio show indicates that he was motivated more by his anti-cop racial agenda while serving as a juror than fidelity for justice and the rule of law.

The clip can be heard here:

Big League Politics reported on how the jury was repeatedly intimidated by the fake news media and their captive mobs of subhuman jackals throughout the Chauvin trial:

“With the jury expected to come back with a verdict on former Minneapolis police officer Derek Chauvin in the near future, the fake news media is releasing more identifying information about jurors.

Although the fake news has not named the jurors explicitly, they are releasing more information about them that could be used by ANTIFA terrorists, Black Lives Matter thugs and other abhorrent reprobates to discover their identities in the event they choose to acquit Chauvin of wrongdoing in the death of drug-addicted serial felon George Floyd.

“The tensions there and people potentially being upset depending on what the jury returns. I know the jury is partially sequestered right now, meaning that they are not allowed to have their phones or check their devices while in court, but they’re in a break now which would be a period where they could check and they would have access to their devices,” the CBS News anchor said to set up the stage for partially doxxing the jurors.

“Do you have any sense from covering this from the beginning, from being in the court room on a couple of days, that the jury is aware of the powder-keg and the significance around the trial, the eyes of the world, the larger meaning of what is at stake here in the court,” he said to reporter Jamie Yuccas.

Yuccas then started to explain the movement of the jurors, how they are transported in and out of the courtroom, and shared details about them to the public.

“Well, they’ve been keeping the jury very tight together as they are coming in and out of court. So we know there is a tunnel system underneath the government center, and they have been bringing the jurors up through that. The only times the jurors have been seen within the government center is when they have lunch, which is in the basement of the cafeteria,” she said.

“Other than that, we got a list of all 14 jurors – their ages, what they had written on some of their statements that they provided to the court before they were selected as jurors. So what we know from that, and that’s really the only information besides being in the courtroom that I can give to you, is that from those statements that they provided the court, there is at least one juror who lives in Brooklyn Center near where Daunte Wright was shot and killed by police just last week,” Yuccas added.

Wright is the latest felonious thug who is being celebrated as an angel in order to give certain aggrieved privilege groups the opportunity to do what they do best: steal and destroy.

Yuccas also noted that there are “at least two or three other jurors who have connections to Brooklyn Center” as CBS News displayed the age, gender and racial makeup of all the jurors on the screen.

“It does look like two caucasian women will be…let go [from the jury]. We will make sure to see if that does in fact happen. But based on other cases, that is what should happen, which makes the jury even more diverse than what we’ve talked about before in this case,” she said.”

Judge Cahill has commented that the ruling could be overturned and declared a mistrial because of what a disgrace the proceedings were. Any retrial is not likely to be any more legitimate as the first, as left-wing terror has clearly taken hold over America.