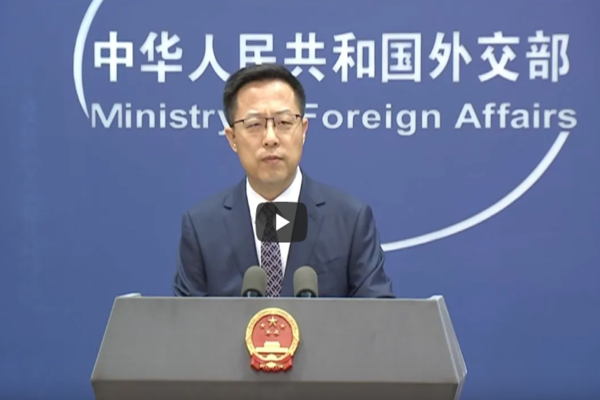 Pelosi landed in Singapore on Monday and has since met with its president and prime minister, bringing along a congressional delegation. Pelosi’s office confirmed the delegation would also visit Malaysia, South Korea, and Japan. Rumors for weeks have indicated that Pelosi had long been considering a surprise stop in the sovereign, democratic nation of Taiwan – defying the Chinese Communist Party, which falsely claims Taiwan as a rogue “province” and dismisses its government as an illegitimate separatist entity.

Rep. Michael McCaul (R-TX) confirmed to Breitbart News last week that Pelosi was planning to visit Taiwan and had invited him to join, though he was unable to due to scheduling reasons.

Various Communist Party spokesmen and propagandists have spent much of the past month threatening Pelosi in an attempt to prevent the visit, warning that Beijing would consider such a high-profile visit a violation of its “One China” policy – which insists that Taiwan (the Republic of China) is a province of the People’s Republic of China. Top Global Times commentator Hu Xijin suggested last week that Chinese forces should shoot Pelosi’s plane down if it appears to be traveling to Taiwan. Hu described a visit to Taiwan by Pelosi and the delegation, even if welcomed by the Taiwanese government, as an “invasion” of China.

Chinese Foreign Ministry spokesman Zhao Lijian addressed the situation with threats once again on Monday, though he did not warn of any particular measure against the United States.

“If she dares to go, wait and see!” Zhao told a reporter ominously.

“The Chinese People’s Liberation Army will not sit back,” Zhao told reporters, according to Chinese state media. “China will take resolute and strong countermeasures to protect its sovereignty and territorial integrity.”

On Friday, during his last regular news briefing, Zhao similarly said China would respond to Pelosi flying to Taiwan with unspecified “resolute countermeasures.”

“The U.S. side must bear all consequences arising therefrom, Zhao said at a daily news briefing when answering a query on whether U.S. House of Representatives Speaker Nancy Pelosi’s potential visit to Taiwan would ruin the atmosphere for holding more high level dialogues between China and the United States,” according to the People’s Daily, the official newspaper of the Chinese Communist Party.

The Global Times, China’s most belligerent English-language government propaganda outlet, published multiple posts on Sunday in preparation for the PLA’s anniversary describing displays of military power as attempted deterrents to keep Pelosi out of Taiwan.

“Shortly prior to Army Day, which falls on August 1, the PLA revealed new progress made in its advanced weaponry and equipment including its hypersonic missile, amphibious assault ship, aerial tanker and large destroyers,” the Times reported on Sunday, “all of which are described by military analysts as having important roles to play if a conflict breaks out in the Taiwan Straits.”

“With Pelosi’s potential visit to Taiwan, this year’s Army Day is a special one,” the outlet continued, “with concrete and realistic combat preparations being made against one of the most severe provocations against China’s sovereignty since the 1996 Taiwan Straits crisis, analysts say.”

The Times highlighted PLA propaganda shared on social media, including a video titled “preparing for war!” and multiple state media broadcasts of live-fire drills and the display of alleged anti-aircraft-carrier hypersonic technology.

Elsewhere in its pages on Sunday, the Global Times bizarrely speculated that Pelosi’s plane may have technical troubles and need an emergency landing crossing from one of the four scheduled stops on the trip. In that case, it insisted, the Chinese government should force Pelosi to land on Hainan, a Chinese tropical island near Taiwan, and avoid allowing Pelosi anywhere near the country of Taiwan.

“If Pelosi’s plane really has emergency problems during her trip around China, the People’s Liberation Army (PLA) aircraft can provide protection to her plane and let her land at airports in China’s Sansha city, Hainan Province in the South China Sea, or other airports in the Chinese mainland [the legal territory of China],” the Times posited, “which could provide professional services and assistance, as long as the speaker’s plane stays away from China’s Taiwan.”

Reports out of Singapore indicated that Pelosi did not spend much of her time there discussing China or Taiwan. The U.S. Congressional delegation met with Singapore’s President Hamilah Yacob and Prime Minister Lee Hsien Loong during the first of her scheduled two days in the country. Yacob posted a photo with Pelosi on social media and said the two discussed climate change, women’s rights, and “ways to deepen education and people-to-people ties between our two countries.”

Singapore’s Foreign Affairs Ministry issued an update on the meeting with Lee, the prime minister, which did indicate that Lee addressed tensions between China and America.

Pelosi has for decades been a vocal opponent of the Chinese Communist Party, once famously protesting against communism in Tiananmen Square, the site of one of the Party’s most prominent mass killings. In more recent years, however, Pelosi’s position on the Communist Party has been largely compromised by business dealings between Beijing and members of her family.

“Nancy Pelosi used to be pretty anti-Chinese Communist Party early in her career, and then her husband and son started seeking deals in Beijing,” Breitbart News senior contributor and blockbuster author Peter Schweizer explained in January, citing research from his book Red-Handed: How American Elites Get Rich Helping China Win. “And it’s interesting, you’ll remember the last time China held the Olympics in 2008, Nancy Pelosi was in favor of a boycott. And then, lo and behold, her husband was partner in a couple of limousine companies that got major contracts in China to ferry VIPs around the Olympics, and Nancy Pelosi suddenly went from boycotting the Olympics to saying that she was opposed to a boycott for the Olympics.”