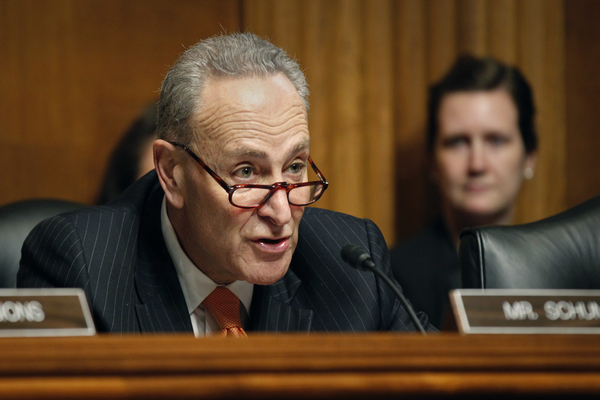 (breitbart) – Senate Majority Leader Chuck Schumer (D-NY) is being criticized for his silence about antisemitic violence on the streets of New York that took place this week as pro-Palestinian demonstrators attacked pro-Israel counter-protesters and Jews nearby.

Yet Schumer has said nothing about the violence in his own state.

Ironically, Schumer has been voluble about other forms of bigotry, and other riots, celebrating the signing of a bill on anti-Asian hate crimes, and pushing for a bipartisan commission on the Capitol riot of January 6. But he has been silent about antisemitism in New York, and similar attacks in cities around the country, notably Los Angeles, where pro-Palestinian rioters attacked Jews.

In a further irony, Schumer tweeted about Times Square on Friday, noting a new grant to Broadway, but ignored antisemitism:

Former Democratic state assemblyman Dov Hikind called out Schumer and other Democratic leaders for their inaction:

New York City Mayor Bill de Blasio condemned the violence, but has also faced accusations of antisemitism in the past.

Schumer’s silence was also panned by John Podhoretz in Commentary, in an op-ed titled: “As Pogromists Activate, Chuck Schumer Cowers.” Commentary associate editor Noah Rothman added: “Street violence targeting American Jews is on the rise across America. It is being provoked and condoned by progressives within the Democratic establishment, and the party is doing nothing about it.”

In the past, Schumer has regaled Jewish groups about the fact that his surname is close, linguistically, to the Hebrew word for “guardian.” He has promised to be a guardian for both the American Jewish community and for Israel. But thus far, he has not.

President Joe Biden has also been quiet about the antisemitic attacks thus far, prompting a letter from Jewish groups on Friday, asking that the president speak out. Sen. Josh Hawley (R-MO) announced in a press statement on Friday afternoon that he will introduce a resolution in the Senate on Monday condemning the recent antisemitic violence around the nation.

Joel B. Pollak is Senior Editor-at-Large at Breitbart News and the host of Breitbart News Sunday on Sirius XM Patriot on Sunday evenings from 7 p.m. to 10 p.m. ET (4 p.m. to 7 p.m. PT). He is the author of the new e-book, The Zionist Conspiracy (and how to join it). His recent book, RED NOVEMBER, tells the story of the 2020 Democratic presidential primary from a conservative perspective. He is a winner of the 2018 Robert Novak Journalism Alumni Fellowship. Follow him on Twitter at @joelpollak.