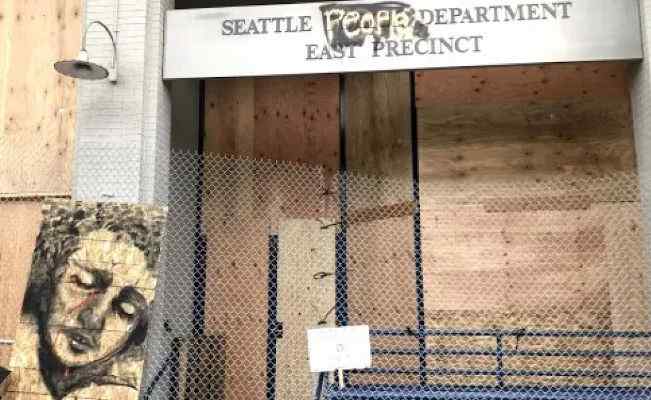 This is creepy racist stuff from the Left.

Core American concepts such as “objectivity” and “individualism” were classified as “internalized racial superiority” and demonized during the training.

White employees were told to accept an increased possibility for physical harm, a willingness to lose all control, and a potential loss of employment as a way of “undoing” their whiteness.

They produced additional propaganda in order to further convince the white employees to hate themselves for their skin color.

The white employees were instructed to alienate friends and family while belligerently proselytizing their new dogma, a tactic regularly used by cults on their new victims.

Rufo is pushing to get the videos of the diversity training from the city in order to figure out which individuals and groups were paid with taxpayer money to administer the marxist re-education:

Seattle has sunk into anarchy and chaos because of its left-wing politicaly leadership, Big League Politics has reported.

Seattle Mayor Jenny Durkan initially celebrated CHAZ/CHOP, the former autonomous zone that descended into mayhem amidst countless allegations of rape, murder and assault, in an attempt to stick it to President Donald Trump:

Seattle Mayor Jenny Durkan has come out explicitly in favor of the far-left Capitol Hill Autonomous Zone (CHAZ), rebuking President Donald Trump for coming out against the lawless collective. “Lawfully gathering and expressing first amendment rights, demanding we do better as a society and provide true equity for communities of color is not terrorism – it is patriotism,” Durkan wrote in a tweet. “The Capitol Hill Autonomous Zone #CHAZ is not a lawless wasteland of anarchist insurrection – it is a peaceful expression of our community’s collective grief and their desire to build a better world. Given his track record, it’s not hard to believe that Trump is wrong, yet again,” she wrote in a subsequent Tweet. She continued on for many more tweets, making every excuse she could muster for the lawless anarchistic protesters who have seized several blocks of the city and defaced the abandoned police station located therein. “Seattle is passionate, we demand justice, and I believe we will be at the forefront of true, meaningful change. Nothing will distract our city from the work that needs to be done,” Durkan wrote. “I remain committed to working with community, including the organizers currently on Capitol Hill, to re-imagine how we do things as a city, and what investments in public health, safety, and economic justice look like,” she added.

The marxists now dominate institutional power across the former land of the free, particularly in liberal areas like Seattle. The result could mean the death of America and by proxy Western Civilization.