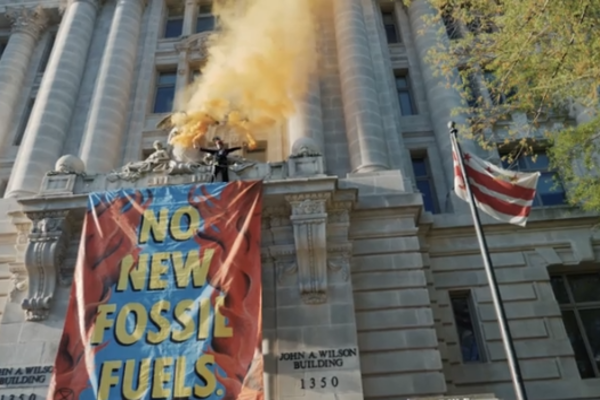 (breitbart) – Leftists celebrated Earth Day on Friday by using it as a political wedge to cudgel those whom they oppose into compliance.

Earth Day, first designated as an annual event in 1970, has origins that go back to ancient forms of paganism. For instance, nature worship or “earth religion” includes forms of paganism, such as “animism” (a worldview that all animals and plants have a spirit), “Wicca” (worship of earth mother goddess by magic), and “druidism” (the natural world is synonymous with divinity).

According to Refinery 29, Earth Day is a “sacred holiday” and “a chance for Pagans to show gratitude to nature.” In that sense, “every day is Earth Day,” Pagan author Deborah Blake claimed.

Left-wing political pundits use the sacred holiday to push environmentalism, which is different than conservationism. The radical left has adopted environmentalism as a wedge to promote “climate change,” a political cudgel to orient the American economy away from capitalism.

Earth Day is often spoken about in political terms:

Candidate for Congress and “LGBTQ ally,” Dr. Steve Woodsmall, shared a photo that suggested “humans are the disease,” while a virus would be the cure.

MSNBC commentator, Ayman, said he would be “jamming out” to Blinken’s Earth Day playlist.

Will Hackman, who advocates for “public lands protections,” wrote in the Hill that “Earth Day can serve as a wake-up call for urgent local action.”

Carole Saab, who has a “Strong bias for action,” said she is using Earth Day to “address climate change and create a more sustainable future.”

This Earth Day, I’m taking the time to celebrate the work we’ve already completed and reflect on the work that remains. I’m looking forward to continued collaboration across all orders of government as we work to address climate change and create a more sustainable future. 5/5

Hosea Cleveland, who is “Pro-Education” and “Very Afrocentric,” asked what happens when humans leave earth and find gay angels.

Casey Kulla, who is running for Oregon Labor Commissioner, used Earth Day to call on Oregon’s next governor to “Listen to your tribal partners.”

Candidate Wade Herring used Earth Day as a political issue and claimed a Republican congressman is a “climate denier.”

Earth Day polling on Friday revealed that “climate change” is the last priority for Americans and has dropped as an issue that must be dealt with immediately.