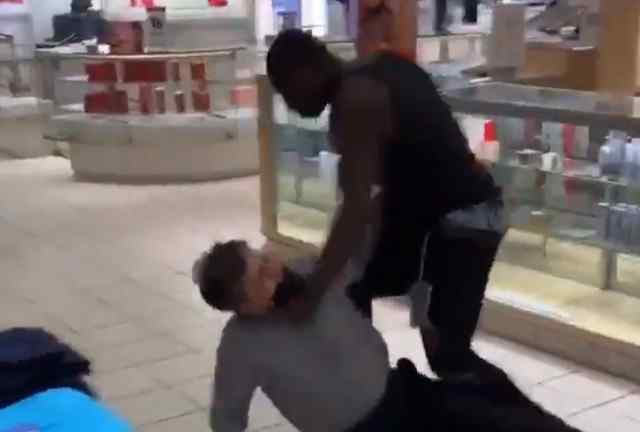 (Gateway Pundit) – A black man brutally attacked a white Macy’s employee on camera in Michigan last week. The brutal attack was entirely unprovoked, according to an investigation by the department store.

The Gateway Pundit first reported on this criminal attack a week ago.

The shocking attack was filmed by the attacker’s brother, Michigan rapper “FT Quay.”

The rapper claimed that he heard the employee, who appeared to be on the phone when the attack happened, say “n-gger.”

The store’s investigation later found that to be a complete lie.

“We are deeply saddened about the incident that took place on Monday (June 15) at Macy’s Genesee Valley as the safety of Macy’s customers and colleagues is our top priority,” Andrea Schwartz, senior director of media relations for Macy’s, told MLive. “Violence in the workplace of any kind is unacceptable. All the materials from the evening have been reviewed and it is clear that the attack was unprovoked. We are working closely with local authorities on this investigation, and will defer any further comments about the case to them per policy.”

FT Quay claimed that his brother attacked the worker “on instinct” — like an animal.

“I didn’t touch you. … I’m sorry,” the employee pleaded as the attack continued.

FT Quay has since deleted his social media following the attack.

And police announced they were investigating both him and his brother for the brutal attack.

On Friday the Genesee County Prosecutor David Leyton announced Damire Canell Palmer is charged in a not-in-custody warrant with intent to do great bodily harm, a 10-year felony.

Via The Detroit News:

An 18-year-old Mount Morris Township man has been charged and is being sought in the assault of a manager at the Macy’s department store in the Genesee Valley Center. Genesee County Prosecutor David Leyton announced Damire Canell Palmer is charged in a not-in-custody warrant with intent to do great bodily harm, a 10-year felony, in the attack on the 50-year-old manager who was working in the men’s clothing section around 5:30 p.m. on June 15. In surveillance video obtained from Macy’s by Flint Township Police, Palmer is allegedly seen walking around the store. He then approaches and sucker-punches the manager in the head from behind, knocking him to the floor, according to authorities. The video allegedly shows Palmer continuing to strike the manager while the employee is on the floor. Palmer then exits the store with another man. Leyton indicated that despite public comments on social media, the police investigation did not uncover any evidence of provocation by the store manager.