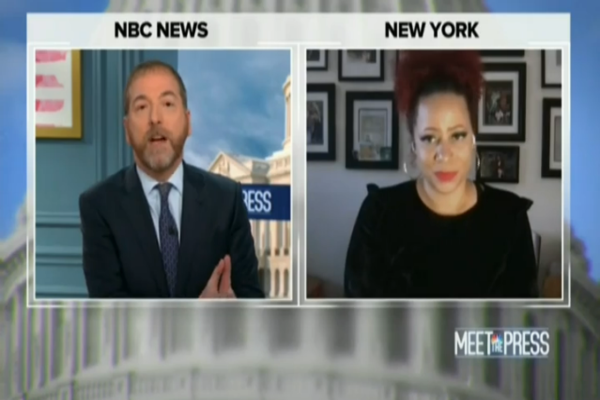 (breitbart) – Nikole Hannah-Jones, 1619 Project creator and professor, said Sunday on NBC’s Meet the Press that laws prohibiting her work in education were an example of Americans entering “a dark age of repression and suppression of the truth.”

Anchor Chuck Todd said, “At the end of the day, this politicizing of this, it’s clearly been weaponized. You’ve described it pretty well and the weaponization of it. Do you think simply time will get us past this? How can we get over this hump?”

Hannah-Jones said, “I don’t know, honestly. I’m quite concerned about what’s happening in our country because, as you know, my project, which is a work of journalism by the New York Times, is banned by name in Georgia, Florida, and Texas. There are efforts to ban the teaching of this history in Oklahoma, South Dakota, Tennessee. When we think about what type of society bans books or bans ideas, that is not a free and tolerant democratic society. That’s a society that is veering towards authoritarianism unless people who believe in free speech, who believe in our children being intellectually challenged, begin to get organized and speak up. I think we’re going into a dark age of repression and suppression of the truth. Really these laws are paving the way for the taking away of other rights, voting rights, women’s reproductive rights, rights for LGBTQ people. So we are going to have to decide what kind of country we want to be.”

Hannah-Jones said, “I don’t really understand this idea that parents should decide what’s being taught. I’m not a professional educator. I don’t have a degree in social studies or science. We send our children to school because we want them to be taught by people who have expertise in the subject area. And that is not my job.”

Referencing former Virginia Gov. Terry McAuliffe, Hannah-Jones said, “When the governor or the candidate said he didn’t think parents should be deciding what’s being taught in school, he was panned for that, but that’s just the fact. This is why we send our children to school and don’t homeschool, because these are the professional educators who have the expertise to teach social studies, to teach history, to teach science, to teach literature. I  think we should leave that to the educators. Yes, we should have some say, but school is not about simply confirming our worldview. Schools should teach us to question. They should teach us how to think, not what to think.”