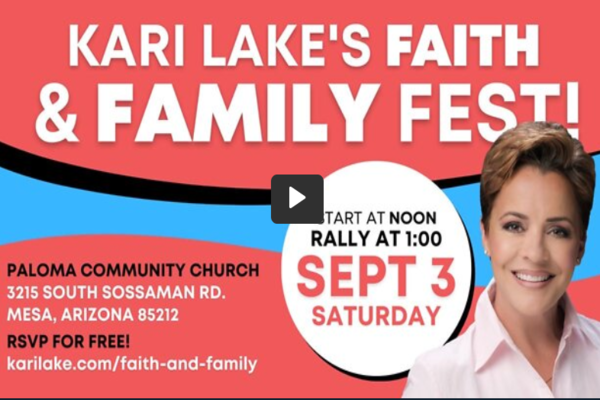 On Saturday, Masters appeared at GOP gubernatorial nominee Kari Lake’s “Faith and Family Fest” rally at Paloma Community Church in Mesa and spoke of Biden’s speech. On Thursday, the president claimed that “MAGA Republicans represent an extremism that threatens the very foundations of our Republic.”

He noted that Biden “promised to unite America” while on the campaign trail a few years back and asserted that “in a weird way, it’s actually the one campaign promise he might end up making good on.”

“America is uniting. We’re uniting against Joe Biden,” Masters declared before calling out his opponent, Sen. Mark Kelly (D-AZ). “And I’ve got a message to Joe Biden and all of his regime propagandists and to all of his enablers and sidekicks in the Congress like Senator Mark Kelly: You guys are done.”

Masters went on to state that America First supporters “want border security,” “energy independence,” affordable goods, “safe streets,” a say in their children’s education, “a government that actually respects” the constitution, and “free and fair elections.”

“So tell me, which part of that agenda is controversial? Which part is radical? Did you hear anything extreme in there?” Masters asked the spectators. “This is just common sense. Every American wants this stuff except for a handful of demented left-wing radicals.”

Masters detailed that the “Democrats in charge… know they’ve failed. They don’t have anything to run on in November, so they resort to name calling,” such as labeling MAGA supporters extremists.

“But voters are not going to be fooled. Joe Biden, Mark Kelly, they had their chance, and they failed. And now it’s our turn, and we’re going to succeed,” Masters declared.