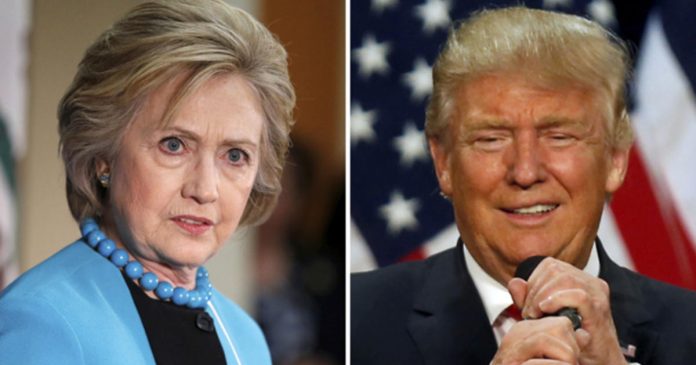 (Gateway Pundit) – Twice-failed presidential candidate Hillary Clinton is claiming that she is facing “enormous pressure” to run again in 2020, and will not completely rule out the possibility.

While the former First Lady says that it is “absolutely not in her plans” she also said to “never say never.”

“As I say, never, never, never say never,” Clinton told BBC Radio 5 Live when asked about if she has ruled out running again. “I will certainly tell you, I’m under enormous pressure from many, many, many people to think about it.”

“But as of this moment, sitting here in this studio talking to you, that is absolutely not in my plans,” Clinton claimed.

Clinton has been attacking actual 2020 candidate Tulsi Gabbard for months now, accusing her of being a Russian asset as her popularity surges.

Rep. Gabbard responded to the slander, referring to the former First Lady as “Queen of the Warmongers” and “embodiment of corruption.” She also challenged Clinton to join the race.

Hillary Clinton ran for president. She lost. Badly. In the Electoral College, she got crushed, 304-227.

But unlike all the other losers who didn’t get to move into the White House, Clinton never went away. And she just can’t stop thinking about her humiliating loss and how wonderful the world would be if she had won.

“I feel a sense of responsibility partly because, you know, my name was on the ballot, I got more votes, but ended up losing to the current incumbent in the White House who I think is really undermining our democracy in very fundamental ways,” Clinton said. “And I want to retire him.”

Clinton also second-guessed her weak campaign, saying she could have been “gutsier” in her run against Trump, the British paper The Express reported.

“It’s a question that I ask myself all the time because trying to live a gusty life doesn’t mean you are always successful in doing so,” Clinton said. “And I think about the presidential campaign of 2016. I thought I was as gutsy as I could be, but I probably could have been gutsier — if I figured out a way to reveal what was happening in a more effective way.”

“You know when we talked about how the Russians were behind the theft of material, a lot of people thought, ‘What are they talking about?’ They just dismissed us in both the public and the press,” Clinton said. “So, could I have been gutsier in pushing that point and trying to alert people to what is going on?”

Clinton, who many think may still jump into the 2020 race, said she’s focused on what’s happening now.

“Right now, we’ve got a campaign going. We’ve got people already running,” she said. “We have to figure out how we make the case. That’s what I’m really focused on.”

“I try to give the best advice that I can to the candidates who are running because my goal is to help retire the current incumbent,” she said. “I think it is imperative that our country regain its leadership and its credibility, so I’m going to do everything I can to make that happen.”

Asked if she would endorse a candidate, she said: “I don’t think so.

“I think I will support them, and answer their questions in any way that I can. But once we have a nominee to do everything I know to do to win.”

In another poll, this one by Harvard Harris, Clinton and former vice president Joe Biden are virtually tied for the Democratic presidential nomination. In the survey, Clinton would get 18% of the vote if she enters and Biden would get 19%. Without her in the race, Biden draws 33% of support from registered Democrats.

And Hillary has been dropping hints all along the way. “Maybe there does need to be a rematch,” Clinton said of Trump last month on the PBS “News Hour.”

“Obviously, I can beat him again. But, just seriously, I don’t understand, I don’t think anybody understands what motivates him other than personal grievance, other than seeking adulation,” she said.